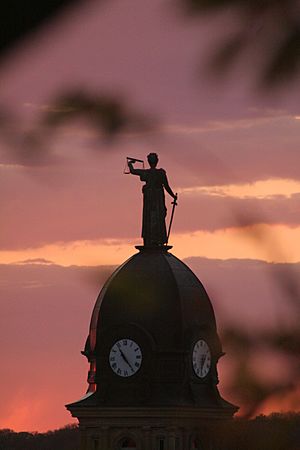 According to local Welsh-language poet James D. Price, whose Bardic name was "Ap Dewi", the first Eisteddfod held in Mankato took place at the Blue Earth County Courthouse on January 1, 1873.

By the late 1800s, the county commissioners felt that the previous buildings were a "disgrace and gave strangers that we were behind the times. That the county was either poverty stricken or greatly lacking in enterprise." The new building, designed by Minneapolis architects Haley & Allen, combined a Second Empire roof and dome with Italianate features. The stone was provided by a local quarry, with various techniques giving it both rusticated and ashlar surfaces. The copper-sheathed dome is capped with a statue of Lady Justice.

All content from Kiddle encyclopedia articles (including the article images and facts) can be freely used under Attribution-ShareAlike license, unless stated otherwise. Cite this article:
Blue Earth County Courthouse Facts for Kids. Kiddle Encyclopedia.