Kids Encyclopedia Facts
Not to be confused with Blue Earth, Minnesota.

The area of Blue Earth County was once known as the "Big Woods" and occupied by the Dakota Indians. It was started by a French explorer, Pierre-Charles Le Sueur. He was one of the first white people in this area, arriving where the Minnesota and Blue Earth rivers meet. There, he made an unsuccessful attempt to mine copper from the blue earth found in the area. The area remained under French control until 1803, but soon after was passed to the United States by the Louisiana Purchase.

When Minnesota became a territory in 1849, the territorial government became interested in having the river valley for settlement. In 1850 the first steamboat trip, starting in St. Paul, traveled on the Minnesota River and came to the Blue Earth River. The first White settlers, P.K. Johnson and Henry Jackson came off the boat and settled in present-day Mankato. The ratification of the Mendota and Traverse des Sioux Treaties in 1851 effectively forced the Dakota to leave the area for nearby reservations.

The county of Blue Earth was created after a division of the Minnesota Territory on March 5, 1853 from portions of Dakota County and free territory. It was named after the Blue Earth River. The first government officials were appointed by Alexander Ramsey, who was the territorial governor. That October the first election was held for government officials with 22 ballots being taken.

Unfulfilled treaty promises and starvation on the Indians reservation led to the Dakota War of 1862, which resulted in Dakota defeat and the largest mass execution in US history in Mankato. In 1868 the railroads' arrival helped with the growth and development of many areas, including Blue Earth. The railroads allowed many White ethnic immigrants and Yankee settlers into the area. Blue Earth has grown into a very good county for agriculture, industry, business, education, and culture, and continues to grow today.

According to the U.S. Census Bureau, the county has an area of 766 square miles (1,980 km2), of which 748 square miles (1,940 km2) is land and 18 square miles (47 km2) (2.3%) is water. The Blue Earth River and Le Sueur River flow through a part of the county. The land surface is relatively flat with over 30 lakes in the county. There are many "closed forest savannas" that some call the big woods in the county's northeast. The rivers that flow out of the northeast are surrounded by these big woods. Most of the county is grassland prairie but scattered parts are wet prairie. Some spots that surround the rivers are oak openings and barren brushland. 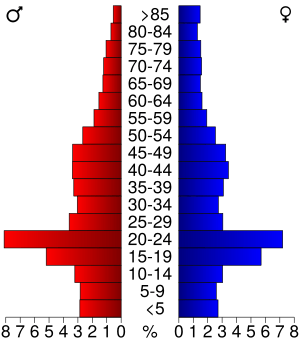 All content from Kiddle encyclopedia articles (including the article images and facts) can be freely used under Attribution-ShareAlike license, unless stated otherwise. Cite this article:
Blue Earth County, Minnesota Facts for Kids. Kiddle Encyclopedia.