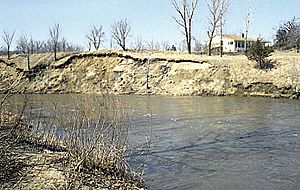 The Le Sueur River in Blue Earth County in 1996

The Le Sueur River rises in Hartland Township in northwestern Freeborn County and flows initially northwardly, through the southwestern extremity of Steele County into Waseca County, then westwardly in a winding course into Blue Earth County, passing through St. Clair. It flows into the Blue Earth River southwest of Mankato, approximately three miles (5 km) upstream of the Blue Earth's mouth at the Minnesota River. Its largest tributaries are the Cobb and Maple Rivers, which it collects from the south approximately six and eight miles (10 km/13 km) upstream of its mouth, respectively. A minor tributary of the Le Sueur River in Waseca and Steele Counties is known as the Little Le Sueur River.

The Le Sueur River flows in most of its course on till plains and on the plain of a former glacial lake, through deeply incised ravines in its lower course. Extensions of the Big Woods, a tract of hardwoods that has since been largely converted to agricultural use, historically followed the river's riparian corridor southward. According to the Minnesota Pollution Control Agency, approximately 84% of the larger watershed of the Blue Earth River is used for agricultural cultivation, primarily that of corn and soybeans.

All content from Kiddle encyclopedia articles (including the article images and facts) can be freely used under Attribution-ShareAlike license, unless stated otherwise. Cite this article:
Le Sueur River Facts for Kids. Kiddle Encyclopedia.