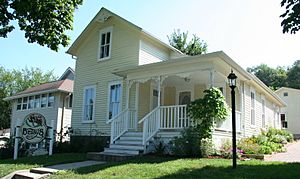 Maud Palmer Hart was born in Mankato, Minnesota to Tom Hart, a shoe store owner, and his wife, Stella (née Palmer). Maud was the middle child; her sisters were Kathleen (Julia in the Betsy-Tacy books) and Helen (book character, Margaret). Maud reportedly started writing as soon as she could hold a pencil. She wrote in her high school's essay contest during her junior and senior years.

She was baptized in a Baptist church but joined the Episcopal church as a teenager. She went on to the University of Minnesota but took a leave of absence to go to California to recover at her maternal grandmother's home from an appendectomy. It was while in California that she made her first short story sale – to the Los Angeles Times Magazine. She returned to the university and worked for the Minnesota Daily, but did not graduate.

While spending a year in Europe in 1914, she met Paolo Conte, an Italian musician (who later inspired the character Marco in Betsy and the Great World). Hart married the writer Delos Lovelace when she was 25. Delos and Hart met in April 1917 and were married on Thanksgiving Day the same year. They lived apart until 1919, however, due to Delos' military service in the First World War.

Later, the couple divided their time between Minneapolis and New York (including Yonkers and Mount Vernon) for several years. After 1928, they lived in New York permanently until their retirement in Claremont, California.

They had one daughter, Merian (later Merian Lovelace Kirchner; January 18, 1931—September 25, 1997), named for Delos's friend Merian C. Cooper who directed the film King Kong which was novelized by Delos.

Lovelace's first book was The Black Angels, which was published in 1926 and is a historical novel set in Minnesota. She wrote several more historical novels, including the successful Early Candlelight (1929).

Lovelace is best known for her books for children. The Betsy-Tacy series started in 1938 after Lovelace told stories about her childhood to her own daughter, Merian. The character Betsy is based on Lovelace herself; Tacy is based on her childhood best friend, Frances "Bick" Kenney. The first book in the series, Betsy-Tacy, was published in 1940, and the last book, Betsy's Wedding, was published in 1955. The first four books increase in reading difficulty so that the child can grow up along with Betsy-Tacy. The Betsy-Tacy books take place mostly in the fictional town of Deep Valley, Minnesota, which is based on Mankato. They cover the period from the late 1890s, when Betsy is five years old, until World War One, by which time Betsy is newly married and has recently completed a grand tour of Europe.

There are also three loosely connected books set in Deep Valley: Winona's Pony Cart, Emily of Deep Valley and Carney's House Party, in which Betsy and Tacy have minor roles. The series has been enduringly popular. The city of Mankato declared Betsy-Tacy Day on October 7, 1961.

Lovelace spent her later years in Claremont, California, where she died in 1980. She is buried in the Glenwood Cemetery in Mankato, with a monument dedicated to her.

The Maud Hart Lovelace Book Award was established in 1980. Each year, a group of nominees is chosen in two categories: grades 3–5 and grades 6–8. Children who have read at least three books in the relevant category cast a vote for their favorite. Whoever gets the most votes wins the award and $100. Details about her life and work can be found in The Betsy-Tacy Companion by Sharla Whalen and in Maud Hart Lovelace's Deep Valley by Julie A. Schrader.

All content from Kiddle encyclopedia articles (including the article images and facts) can be freely used under Attribution-ShareAlike license, unless stated otherwise. Cite this article:
Maud Hart Lovelace Facts for Kids. Kiddle Encyclopedia.