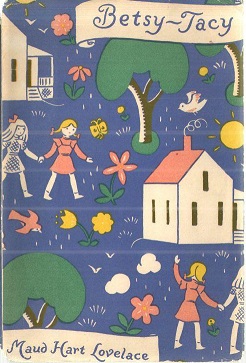 Betsy-Tacy (1940) is the first volume in the Betsy-Tacy series by Maud Hart Lovelace.

The book is mostly about the adventures of five-year-old Betsy Ray and her new best friend, Tacy Kelly. It takes place in fictional Deep Valley, Minnesota, based on Mankato, Minnesota, the author's home town. This first book is set in roughly 1898-1899.

The adventures between the two friends range from the real life (such as going to school for the first time, making a playhouse out of a piano box, and dressing up to go calling) to the extraordinarily fanciful (such as being taken for a ride in the milkman's magic wagon by his talking horse, and flying away on a cloud while enjoying a picnic). The fanciful adventures are provided by Betsy's active imagination and her love of telling stories. The book deals with the themes of shyness, with the birth of new siblings, with the joys of an active imaginations, and even touches on death within the family.

Betsy Ray (Elizabeth Warrington Ray)- the main character of the series, based on Maud Hart Lovelace herself as a child. Betsy is a gregarious, imaginative child who dreams of being a writer. She loves to tell stories above all else. She is described as chunky with brown braids that stick out from behind her ears.

Julia Ray- Betsy's older, somewhat bossy sister. While she's only three years older than Betsy, she considers herself quite grown-up, and feels free to lord that over the younger Betsy and Tacy. Has a pronounced interest in music that is developed much more extensively in later books.

Katie Kelly- Tacy's older, somewhat bossy sister. There are 11 children in the Kelly household in the opening of the book, and Katie is the fourth youngest. She and Julia are best friends.

Margaret Ray- a new baby born to the Ray's during the course of the book. Betsy at first feels jealous of the newcomer usurping the 'baby' spot, but after a talk with Tacy, realizes the fun of being an older sibling.

Beatrice Kelly- Tacy's baby sister, who dies shortly before Easter. Just as Tacy comforted Betsy in the gaining of a new sibling, Betsy comforts Tacy in the loss of a sibling.

Tom- a neighborhood boy who plays the violin and has a little crush on Tacy.

Tib Muller (Thelma Muller)- A little girl who moves into the neighborhood shortly before the end of the book. She's tiny and blond, and knows how to stand on her head. She lives in a chocolate-colored house with a pane of colored glass over the door. She meets Betsy and Tacy because they left Mrs. Ray's calling cards in the Muller's mailbox. Mrs. Muller returned the call, and the three girls eventually met. All become best friends in the two years in between the first book and the second.

All content from Kiddle encyclopedia articles (including the article images and facts) can be freely used under Attribution-ShareAlike license, unless stated otherwise. Cite this article:
Betsy-Tacy (novel) Facts for Kids. Kiddle Encyclopedia.