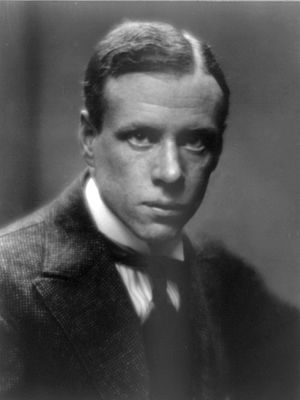 Harry Sinclair Lewis (February 7, 1885 – January 10, 1951), better known as Sinclair Lewis, was an American novelist, short-story writer, and playwright. In 1930, he became the first writer from the United States to receive the Nobel Prize in Literature. His works are known for their insightful and critical views of American capitalism and materialism between the wars. He is also respected for his strong characterizations of modern working women. He has been honored by the U.S. Postal Service with a postage stamp in the Great Americans series.

Lewis died in Rome on January 10, 1951, aged 65, and his cremated remains were buried in Sauk Centre.

All content from Kiddle encyclopedia articles (including the article images and facts) can be freely used under Attribution-ShareAlike license, unless stated otherwise. Cite this article:
Sinclair Lewis Facts for Kids. Kiddle Encyclopedia.