Sauk Centre is a city in Stearns County, Minnesota, United States. The population was 4,317 at the 2010 census. Sauk Centre is part of the St. Cloud Metropolitan Statistical Area.

Sauk Centre is the birthplace of Sinclair Lewis, a novelist and winner of the Nobel Prize in Literature. It inspired his fictional Gopher Prairie, the setting of Lewis's 1920 novel Main Street.

Sauk Centre is located along Interstate 94, U.S. Highway 71, and Minnesota State Highway 28. It is approximately 100 miles northwest of the Minneapolis/Saint Paul metropolitan area.

The city is considered to be in the middle of the state. Sauk Lake and Sauk River are the most notable water features of the area. Fairy Lake and Lily Lake are located just outside of the city limits.

There were 1,851 households, of which 28.4% had children under the age of 18 living with them, 50.5% were married couples living together, 9.4% had a female householder with no husband present, 3.6% had a male householder with no wife present, and 36.6% were non-families. 32.1% of all households were made up of individuals, and 18% had someone living alone who was 65 years of age or older. The average household size was 2.28 and the average family size was 2.86.

When the community was voting on names for the town, the name Sauk Centre was suggested by Alexander Moore. The town was located on Sauk Lake with the roads centering on the lake. Therefore, the town was named Sauk Centre.

A violent local incident in 1996, where the elderly Paul Crawford shot and killed four members of the neighboring Schloegl family over a property dispute, was featured in the episode "Lake of Madness" on the Investigation Discovery series "Fear Thy Neighbor." The episode aired on April 20, 2015. 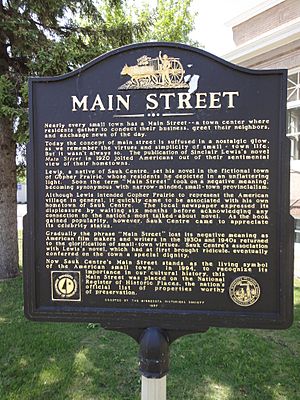 All content from Kiddle encyclopedia articles (including the article images and facts) can be freely used under Attribution-ShareAlike license, unless stated otherwise. Cite this article:
Sauk Centre, Minnesota Facts for Kids. Kiddle Encyclopedia.