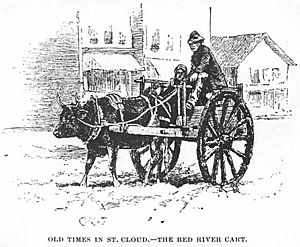 St. Cloud is a city in the U.S. state of Minnesota and the largest population center in the state's central region. Its population is 68,462 according to the 2019 US census estimates, making it Minnesota's tenth largest city. St. Cloud is the county seat of Stearns County and was named after the city of Saint-Cloud, France (in Île-de-France, near Paris), which was named after the 6th-century French monk Clodoald.

Though mostly in Stearns County, St. Cloud also extends into Benton and Sherburne counties, and straddles the Mississippi River. It is the center of contiguous urban area, with Waite Park, Sauk Rapids, Sartell, St. Joseph, Rockville, and St. Augusta directly bordering the city, and Foley, Rice, Kimball, Clearwater, Clear Lake, and Cold Spring nearby. The St. Cloud metropolitan area had a population of 202,996 at the 2020 census. It has been listed as the fifth-largest metro with a presence in Minnesota, behind Minneapolis–St. Paul, Duluth–Superior, Fargo-Moorhead, and Rochester. But the entire St. Cloud area is entirely in Minnesota, while most of Fargo-Moorhead's population is in North Dakota and Superior, Wisconsin, contributes significant population to the Duluth area.

St. Cloud is 65 miles (105 km) northwest of the Twin Cities of Minneapolis–St. Paul along Interstate 94, U.S. Highway 52 (conjoined with I-94), U.S. Highway 10, Minnesota State Highway 15, and Minnesota State Highway 23. The St. Cloud Metropolitan Statistical Area (MSA) is made up of Stearns and Benton Counties. The city was included in a newly defined Minneapolis–St. Paul–St. Cloud Combined Statistical Area (CSA) in 2000. St. Cloud as a whole has never been part of the 13-county MSA comprising Minneapolis, St. Paul, Bloomington and parts of western Wisconsin.

St. Cloud State University, Minnesota's third-largest public university, is located between the downtown area and the Beaver Islands, which form a maze for a two-mile stretch of the Mississippi. The approximately 30 undeveloped islands are a popular destination for kayak and canoe enthusiasts and are part of a state-designated 12-mile stretch of wild and scenic river.

St. Cloud owns and operates a hydroelectric dam on the Mississippi, the state's largest city-owned hydro facility, that can produce almost nine megawatts of electricity, about 10% of the total electricity generated by 11 Mississippi hydro dams in Minnesota.

St. Cloud is the principal city of the St. Cloud Metropolitan Statistical Area, a metropolitan area that covers Sherburne, Benton and Stearns counties and had a combined population of 202,996 at the 2020 census, an increase of 6.67% since 2010.

The city is home to:

The city of St. Cloud is part of the St. Cloud Area School District, which serves St. Cloud, St. Augusta, Clearwater, Waite Park, St. Joseph, Haven Township, and parts of Sauk Rapids. The district has eight elementary schools, a new K-8 school in St. Joseph, and two major public high schools, St. Cloud Technical High School and St. Cloud Apollo High School. St. Cloud also has a major private high school, Cathedral High School. Both public high schools offer a broad selection of Advanced Placement courses and rank high in the state in the number of AP tests taken and of test takers. St. Cloud Tech opened in 1917 across from a city park and Lake George. In 2019, it moved to a new 69-acre, 104-million facility on the southwest edge of the city. The historic 1917 building has been acquired for use by city government. Apollo opened in 1970 and serves the expanding north side of the city. Other high schools and secondary schools that serve the city of St. Cloud include St. Robert Bellarmine's Academy, St. Cloud Christian School, Immaculate Conception Academy, St. John's Preparatory School, St. Cloud Alternative Learning Center, and charter school STRIDE Academy, which is K-8. The nearby cities of Sauk Rapids and Sartell also have their own school districts and high schools, bringing the number of public high schools in the metropolitan area to four.

St. Cloud's other post-secondary institutions and campuses include St. Cloud Technical and Community College (SCTCC) and Rasmussen College. Neighboring Sartell is home to a campus of the Duluth-based College of St. Scholastica, and the College of St. Benedict and St. John's University are in neighboring St. Joseph and nearby Collegeville, respectively.

St. Cloud is a regional transportation hub within Minnesota. Major roadways including Interstate Highway 94, U.S. Highway 10, and Minnesota State Highways 15 and 23 pass through the city.

Bus service within the city and to neighboring Sartell, Sauk Rapids, and Waite Park is offered through St. Cloud Metro Bus, which was recognized in 2007 as the best transit system of its size in North America. An innovative system gives transit buses a slight advantage at stoplights in order to improve efficiency and on-time performance. The Metro Bus Transit Center in the downtown area is also shared with Jefferson Lines, providing national bus service.

Bus service links downtown St. Cloud and St. Cloud State University with the western terminus of the Northstar Commuter Rail line in Big Lake, by the way of Northstar Link Commuter Bus, which in turn links to the Metro Transit bus and light rail system at Target Field Station in downtown Minneapolis.

Several rail lines run through the city, which is a stop on Amtrak's Empire Builder passenger rail line.

All content from Kiddle encyclopedia articles (including the article images and facts) can be freely used under Attribution-ShareAlike license, unless stated otherwise. Cite this article:
St. Cloud, Minnesota Facts for Kids. Kiddle Encyclopedia.