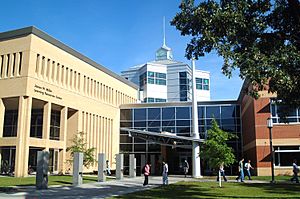 The St. Cloud State University is a university in St. Cloud, Minnesota. It was established in 1869. It has over 18,000 students. It is the largest member of the Minnesota State Colleges and Universities system.

St. Cloud State has teams in 20 NCAA sports, plus the non-NCAA sport of Nordic skiing, nicknamed Huskies. Of the NCAA teams, 18 play in the Northern Sun Intercollegiate Conference, a Division II conference. The men's and women's ice hockey teams compete in the top-level NCAA Division I, with the men playing in the National Collegiate Hockey Conference and the women in the Western Collegiate Hickey Association.

All content from Kiddle encyclopedia articles (including the article images and facts) can be freely used under Attribution-ShareAlike license, unless stated otherwise. Cite this article:
St. Cloud State University Facts for Kids. Kiddle Encyclopedia.