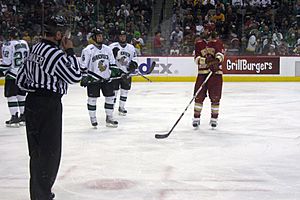 The Western Collegiate Hockey Association (WCHA) is a group of colleges and universities, spanning a wide area of the Midwestern and Western United States, who play NCAA Division I hockey against one another every season. The champions are automatically invited to the NCAA Division I men's and women's hockey tournaments.

In all, 13 schools are members of the WCHA. Seven of these have men's and women's teams that both play in the conference. Five do not have a women's team at all. One school has its women's team only in the WCHA, with its men's team in another conference.

The current members are listed below. Unless otherwise noted, these schools have both men's and women's teams in the conference.

The membership of the men's side of the WCHA will change greatly in July 2013:

All content from Kiddle encyclopedia articles (including the article images and facts) can be freely used under Attribution-ShareAlike license, unless stated otherwise. Cite this article:
Western Collegiate Hockey Association Facts for Kids. Kiddle Encyclopedia.