Sauk Rapids is a city in Benton County, Minnesota, United States. The population was 12,773 at the 2010 census and is 13,424 according to 2015 census estimates. It is located on a set of rapids on the Mississippi River near its confluence with the Sauk River. 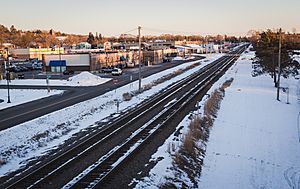 Sauk Rapids was originally little more than a forest of oak, maple and basswood trees along the Mississippi River until the first home was constructed there in 1851, a large mansion named Lynden Terrace erected by W.H. Wood. Soon other settlers followed and the town was named Sauk Rapids after the rapids just below the Sauk River's mouth on the Mississippi. Soon a general store was built, then a hotel, and a large jail. The first settlers organized a Congregational church that was soon followed by a Methodist, an Episcopalian and a Lutheran church. The first paper outside of St. Paul was the "Sauk Rapids Frontiersman," founded in 1854.

In 1874, Sauk Rapids was the end of the line for the local railroad. All the settlers from as far away as the upper Red River Valley brought their produce there to ship it. A six-horse stage coach made bi-weekly trips between St. Cloud and Crow Wing.

In 1856, the county seat moved to Watab, then returned to Sauk Rapids in 1859. A new courthouse was built, but in 1897 the seat moved to Foley where it currently resides. In 1917 the courthouse burned down.

Sauk Rapids was one of the most important cities in Minnesota until 1886, when, on April 14 at approximately 4:00 p.m., a tornado struck the town. The twister swept through the heart of the city, destroying all of the stores. In Sauk Rapids alone, 44 people were killed and several hundred were wounded. The event was a great setback for the city, and though it has rebuilt since then it never regained its former prominence in statewide affairs.

In recent years, the downtown area of Sauk Rapids has gone through substantial changes due to the construction of the New Sauk Rapids Bridge. This was primarily because the new bridge links to 2nd Street rather than 1st Street, as the original Sauk Rapids Bridge did. Also the intersection of Benton Drive and 2nd street was adjusted so the new bridge would extend over the railroad tracks and land on Benton Drive. Several buildings had to be demolished during the construction process, which meant that some parts of downtown were rebuilt. In addition, some sidewalks were repaved with cobblestone and the medians were filled with granite blocks.

There were 4,960 households of which 36.6% had children under the age of 18 living with them, 48.9% were married couples living together, 11.0% had a female householder with no husband present, 5.0% had a male householder with no wife present, and 35.0% were non-families. 26.8% of all households were made up of individuals and 9.2% had someone living alone who was 65 years of age or older. The average household size was 2.49 and the average family size was 3.03.

There were 3,921 households out of which 37.9% had children under the age of 18 living with them, 52.1% were married couples living together, 10.9% had a female householder with no husband present, and 33.7% were non-families. 26.2% of all households were made up of individuals and 10.3% had someone living alone who was 65 years of age or older. The average household size was 2.53 and the average family size was 3.09.

All content from Kiddle encyclopedia articles (including the article images and facts) can be freely used under Attribution-ShareAlike license, unless stated otherwise. Cite this article:
Sauk Rapids, Minnesota Facts for Kids. Kiddle Encyclopedia.