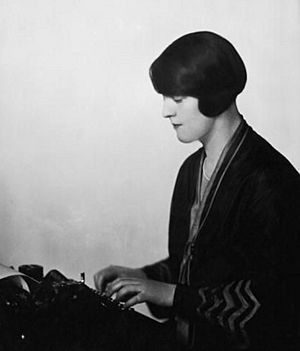 Dorothy Thompson (July 9, 1893 – January 30, 1961) was an American journalist and radio broadcaster. She was the first female journalist to be sent out of Nazi Germany in 1934. She was one of few women presenters on the radio in the 1930s.

She worked for women's suffrage in the United States. After that, she worked for Berlin division of the New York Post.

Thompson was born in Lancaster, New York. She died, aged 67, in Lisbon, Portugal.

All content from Kiddle encyclopedia articles (including the article images and facts) can be freely used under Attribution-ShareAlike license, unless stated otherwise. Cite this article:
Dorothy Thompson Facts for Kids. Kiddle Encyclopedia.