The Illinois Institute of Technology (IIT) is a private university in Chicago, Illinois, United States. It is one of the best universities in the United States as U.S. News & World Report, a magazine, puts it at number 108. Most students of this university focus on science or technology as their major, or subject they study most. IIT was created in 1940 by the merger of the Armour Institute of Technology and Lewis Institute. 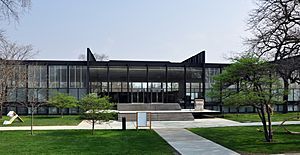 S.R. Crown Hall on the Illinois Institute of Technology campus. Designed by Ludwig Mies van der Rohe in 1956, it was designated a National Historic Landmark in 2001 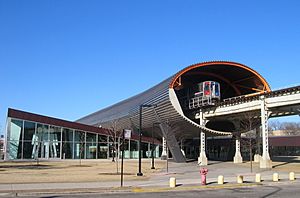 The McCormick Tribune Campus Center. Icons of male figures in action are placed throughout the building; several are visible at the lower left

The campus, roughly bounded between 31st and 35th streets, Michigan Avenue and the Dan Ryan Expressway, was designed by modernist architect Ludwig Mies van der Rohe, "one of the great figures of 20th-century architecture", who chaired the IIT School of Architecture from 1938 to 1958. Van der Rohe's master plan for the IIT campus was one of the most ambitious projects he ever conceived. The campus has twenty of his works. It is the greatest concentration of his buildings in the world. The layout of the campus departs radically from "traditional college quadrangles and limestone buildings". The materials are inspired by the factories and warehouses of Chicago's South Side and "embod[y] 20th century methods and materials: steel and concrete frames with curtain walls of brick and glass."

Alfred Caldwell designed the campus landscape. Caldwall was van der Rohe's close colleague at IIT and was called "the last representative of the Prairie School of landscape architects." Known as "the nature poet", Caldwell's plan reinforced van der Rohe's design with "landscaping planted in a free-flowing manner, which in its interaction with the pristine qualities of the architecture, introduce[d] a poetic aspect."

On the west side of Main Campus are three red brick buildings that were original to Armour Institute, built between 1891 and 1901. In 1938, Ludwig Mies van der Rohe began his 20-year tenure as director of IIT's School of Architecture (1938–1959). The university was on the verge of building a brand new campus, to be one of the nation's first federally funded urban renewal projects. Mies was given great freedom in the large project. The university grew fast enough during and after World War II to allow much of the new plan to be realized. From 1943 to 1957, several new Mies buildings rose across campus, including the S.R. Crown Hall, which houses the architecture school, and was designated a National Historic Landmark in 2001.

Though Mies had emphasized his wish to complete the campus he had begun, commissions from the late 50s onward were given to Skidmore, Owings, and Merrill (SOM), prompting Mies to never return to the campus that had changed architecture the world over. SOM architect Walter Netsch designed a few buildings, including the new library that Mies had wished to create, all of them similar to Mies's style. By the late 1960s, campus addition projects were given to SOM's Myron Goldsmith, who had worked with Mies during his education at IIT and thus was able to design several new buildings to harmonize well with the original campus. In 1976, the American Institute of Architects recognized the campus as one of the 200 most significant works of architecture in the United States. The new campus center, designed by Rem Koolhaas, and a new state-of-the-art residence hall designed by Helmut Jahn, State Street Village, opened in 2003. These were the first new buildings built on the Main Campus in 32 years.

In 1976, American Institute of Architects named the IIT campus one of the 200 most significant works of architecture in the United States. The IIT Main Campus was added to the National Register of Historic Places in 2005.

All content from Kiddle encyclopedia articles (including the article images and facts) can be freely used under Attribution-ShareAlike license, unless stated otherwise. Cite this article:
Illinois Institute of Technology Facts for Kids. Kiddle Encyclopedia.