Lancaster is a town in Erie County, New York, United States, a short distance east of Buffalo. As of the 2010 census, the town population was 41,604.

In 1803, the Holland Land Company sold its first plot of land in the future town. The town of Lancaster was formed from the town of Clarence in 1833. The town was named after Lancaster, Massachusetts, but the reason for applying this name is not known. Originally called "Cayuga Creek", the town later incorporated and obtained the current name.

In 1857, the town's southern half was taken to form the town of Elma.

In the late 1960s, Buffalo developer Edward H. Cottrell proposed what would have been the world's second domed stadium in Lancaster. The Dome Stadium Incorporated was formed but the County refused to participate and resulted in a 20-year breach of contract litigation and eventually lead a dismissal in 1986.

Once known as a small town with a small town atmosphere, Lancaster has, in recent years, evolved into a suburban community. In the early 1990s, the town entered a period of rapid growth, with much development in the southern and eastern parts of the town. The William Street Intermediate School opened in the southern part of town in the mid-1990s, and in 2003, the town and village police departments merged. Additions to the middle school and the William Street School to accommodate rising enrollment were finished in 2005.

Lancaster High School is Erie County's largest school in both student population and square footage. With over 2,000 students, the building was expanded twice. First in 1970 and in 2000, a field house was added. In 2003, the high school opened up a new wing to house natural sciences classrooms.

Some of the town's biggest events are held in the village of Lancaster. They are the Fourth of July Parade and the Taste of Lancaster, a restaurant festival and charity fundraiser. The Lancaster/Depew high school football game is held in October. The game dates back to 1919.

Lancaster once had its own professional football team in the 1910s. The Lancaster Malleables played in the New York Pro Football League and won the league championship in 1913 and 1914.

The town is located on the northern and eastern side of Erie County. The center of Lancaster is 14 miles (23 km) east of downtown Buffalo.

Much of Lancaster is highly suburbanized, but the eastern section of the town, notably the area east of County Route 242 (Bowen Road), is only starting to undergo development, retaining a somewhat-rural character.

There were 15,053 households out of which 33.1% had children under the age of 18 living with them, 58.3% were married couples living together, 8.5% had a female householder with no husband present, and 30.2% were non-families. 26.0% of all households were made up of individuals and 11.0% had someone living alone who was 65 years of age or older. The average household size was 2.55 and the average family size was 3.11.

The town's most populated areas include the village of Lancaster, half the village of Depew, and the two largest hamlets, Town Line and Bowmansville. The town also contains other smaller communities and hamlets.

The town and village of Lancaster contain the following parks: 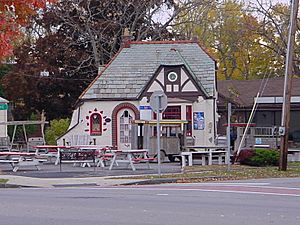 The former Liebler-Rohl Gasoline Station is on the National Register of Historic Places.

A domed football stadium was planned to be built in Lancaster. A plan from January 30, 1970 called for the domed stadium on Pleasant View Drive that would allow for football and baseball games. It would have been modeled after the Houston Astrodome. The Erie County Legislature scrapped the plan a week after Buffalo Bills owner Ralph Wilson, Jr. demanded a definitive stadium plan within 60 days. After scrapping the plan, legislators passed a resolution to seek an alternative project immediately. The domed stadium was first proposed in 1967 but its implementation was blocked over disputes about the location.

Lancaster is home to Buffalo-Lancaster Regional Airport, which is located on Walden Avenue on the east side of the town.

All content from Kiddle encyclopedia articles (including the article images and facts) can be freely used under Attribution-ShareAlike license, unless stated otherwise. Cite this article:
Lancaster, New York Facts for Kids. Kiddle Encyclopedia.