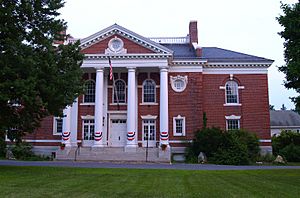 Lancaster was first settled as "Nashaway" (after the local Nashaway Indian tribe) in 1643. It was officially incorporated and renamed "Lancaster on the Nashua" in 1653.

Lancaster boasts being the official "mothertown" to all of central Massachusetts. Towns such as Harvard, Bolton, Leominster, Clinton, Berlin, Sterling, and part of West Boyslton were all once considered part of Lancaster.

Supporters of Lancaster's founder, John Prescott (1604–1681), wished to name the new settlement Prescottville, but the Massachusetts General Court considered such a request from a common freeman presumptuous, given that at that time, not even a governor had held the honor of naming a town after himself. Instead, they decided to use Lancaster, the name of his home town in England.

Lancaster was the site of the Mary Rowlandson (c. 1637–1711) attack in February 1676 (1675 old style calendar). During King Philip's War, which was fought partially in Lancaster, a tribe of Indians pillaged the entire town of Lancaster. Their last stop on their trail of destruction was Mary Rowlandson's house. Coming to the defense of the house was Rowlandson's brother-in-law, who was immediately shot and killed by the attacking Indians. The Indians then set fire to the house, forcing Rowlandson to exit the burning building. Upon crossing the doorstep, Rowlandson saw a scene full of carnage. The majority of her household was slaughtered, with the exception of her husband, Joseph Rowlandson Sr., who was not on the premises, their son, also called Joseph, their two daughters, Mary and Sarah, and herself. Mary, her son, and her two daughters were captured by the Indians and forced to join their travels across New England. The Indians non-fatally shot Mary Rowlandson in her side, but her youngest daughter, Sarah, sustained an injury during the attack that would later bring about her death. 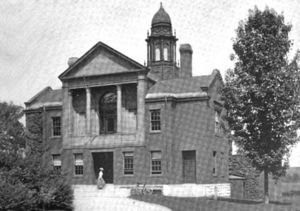 Lancaster is served by the Nashoba Regional School District. It is also the site of the former Atlantic Union College and of South Lancaster Academy, incorporated in 1882–1883. The Dr. Franklin Perkins School is a private special education school located in the town. Trivium School, founded in 1979, is a private Catholic college preparatory school occupying the former estate of E. V. R. Thayer Jr.

All content from Kiddle encyclopedia articles (including the article images and facts) can be freely used under Attribution-ShareAlike license, unless stated otherwise. Cite this article:
Lancaster, Massachusetts Facts for Kids. Kiddle Encyclopedia.