Harvard is a town in Worcester County, Massachusetts. The town is located 25 miles west-northwest of Boston, in eastern Massachusetts. A farming community settled in 1658 and incorporated in 1732, it has been home to several non-traditional communities, such as Harvard Shaker Village and the utopian Transcendentalist center Fruitlands. Today it is an affluent residential town noted for its excellent public schools, with its students consistently ranking in the state's top ten test results in English and math. The population was 6,520 at the 2010 census.

Europeans first settled in what later became Harvard in the 17th century, along a road connecting Lancaster with Groton that was formally laid out in 1658. There were few inhabitants until after King Philip's War, in which Groton and Lancaster were attacked and substantially destroyed. Over the next 50 years the population grew until it had reached a point adequate to support a church. A new town including parts of Lancaster, Groton, and Stow was incorporated in 1732, subject to the proviso that the inhabitants "Settle a learned and Orthodox Minister among them within the space of two years and also erect an House for the publick Worship of God." It is uncertain how the town obtained its name, though the Willard family, among the first settlers and the largest proprietors in the new town, had several connections to Harvard College.

In 1734, the town was considered to have five districts or villages. These were Oak Hill, Bare Hill, Still River, Old Mill and Shabikin, present day Devens.

The town economy was primarily based on agriculture until the middle of the 20th century. This past is most prominently visible in the number of apple orchards. It is now a residential town within reach, for example, of the technology companies outside of Boston. It has had a relatively quiet history, but has attracted several "non-traditional" communities that have given its history some flavor. 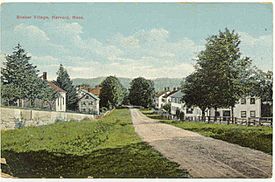 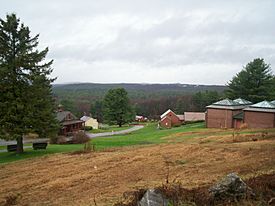 One part of town is the site of Harvard Shaker Village, where a utopian religious community was established. During a period of religious dissent, a number of Harvard residents abandoned the Protestant church in Harvard. They built in 1769 a house that later became known as the Square House. The Shaker Founder Mother Ann Lee met with this group in 1781 and the group joined her United Society of Believers in Christ’s Second Appearing, or Shakers.

It was the first Shaker settlement in Massachusetts and the second settlement in the United States. The Harvard Shaker Village Historic District is located in the vicinity of Shaker Road, South Shaker Road, and Maple Lane. At its largest, the Shakers owned about 2,000 acres of land in Harvard. By 1890, the Harvard community had dwindled to less than 40, from a peak of about 200 in the 1850s. In 1917 the Harvard Shaker Village was closed and sold. Only one Shaker building is open to the public, at Fruitlands Museum; the remaining surviving buildings are in private ownership.

Nationally, 19 Shaker communities had been established in the 1700s and 1800s, mostly in northeastern United States. Community locations ranged from Maine to Kentucky and Indiana. The Shakers were renowned for plain architecture and furniture, and reached its national peak membership in the 1840s and 1850s. The Shaker community's practice of celibacy meant that to maintain its population, it was always necessary to have new outsiders join. The improving employment opportunities provided by the Industrial Revolution would over the middle decades of the 1800s diminish the attractions of joining the Shaker community. Today, only one church "society" remains open, run by the last Shakers at Sabbathday Lake Shaker Village in New Gloucester, Maine.

Amos Bronson Alcott relocated his family, including his ten-year-old daughter, Louisa May Alcott, to Harvard in June 1843. He and Charles Lane attempted to establish a utopian transcendentalist socialist farm called Fruitlands on the slopes of Prospect Hill in Harvard. The experimental community only lasted 7 months, closing in January 1844. Fruitlands, so called "because the inhabitants hoped to live off the fruits of the land, purchasing nothing from the outside world," saw visits from the likes of Henry David Thoreau and Ralph Waldo Emerson. Louisa May Alcott used her experience at Fruitlands as an inspiration for her novel Little Women.

Clara Endicott Sears, whose summer estate was also situated on Prospect Hill, restored Fruitlands and opened it as a museum in 1914. On the grounds of Fruitlands Museum there is also a Shaker house, which was relocated there from Harvard's Shaker Village by Sears in 1920. It is the first Shaker museum ever established in the United States. In addition, Sears opened a gallery on the property dedicated to Native American history. Sears became interested in Native Americans after Nipmuck arrowheads were found around her property on Prospect Hill, which the Nipmuck Indians had called Makamacheckamucks.

Fiske Warren, a follower of Henry George, attempted to establish a single tax zone in Harvard in 1918. The enclave bought up land communally and attempted to manage the land according to George's principles. The enclave failed soon after Warren died in 1938. His house was added to the National Register of Historic Places in 1996.

Father Leonard Feeney was a Jesuit priest who held to a literal interpretation of the doctrine "Extra Ecclesiam nulla salus". His St Benedict Center at Harvard College in Cambridge made numerous converts in the 1940s, among them Avery Cardinal Dulles, the son of John Foster Dulles, secretary of state in the Eisenhower administration. Feeney was excommunicated in 1953. Cardinal Medeiros of Boston visited Feeney on his deathbed and apologized for the heavy-handed way he had been treated by the ecclesiastical authorities 30 years before. A branch of the Saint Benedict Center is located in Still River, on the west side of Harvard.

In Still River there is an abbey of Benedictine monks which branched from the St. Benedict Center. There are six brothers and seven priests. They focus on reverently saying the both Novus Ordo and Tridentine Mass and chanting the Divine Office in Latin. Their current abbot is the Right Reverend Xavier Connelly, OSB, who was elected June 16, 2010. 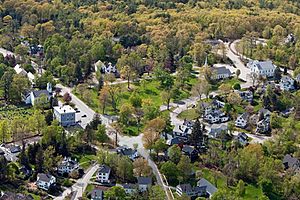 The town is largely wooded with small rolling hills, fields and wetlands. In addition to the numerous streams and brooks throughout Harvard, Bare Hill Pond is a central, iconic locale.

Harvard and the surrounding area are renowned for apple orchards and riding stables.

Harvard is located in MetroWest, surrounded by several towns:

There were 1,809 households out of which 44.7% had children under the age of 18 living with them, 73.4% were married couples living together, 6.9% had a female householder with no husband present, and 17.4% were non-families. 14.3% of all households were made up of individuals and 4.3% had someone living alone who was 65 years of age or older. The average household size was 2.86 and the average family size was 3.18.

The decline in the population of the town of Harvard from the 1990 census to the 2000 U.S. census is attributable to the 1996 closure of Fort Devens, a U.S. military installation and the departure of military personnel and families residing at Fort Devens, which in large part is within the territory of the town of Harvard. The Fort Devens property has in large part been converted to civilian use, under the direction of MassDevelopment, a development authority of the Commonwealth of Massachusetts.

The business with the highest profit in Harvard is the small General Store which is located on the green and has been open since the 1800s. It fits perfectly with the small country town feel and has "Pub Nights" on some Friday Nights.

All content from Kiddle encyclopedia articles (including the article images and facts) can be freely used under Attribution-ShareAlike license, unless stated otherwise. Cite this article:
Harvard, Massachusetts Facts for Kids. Kiddle Encyclopedia.