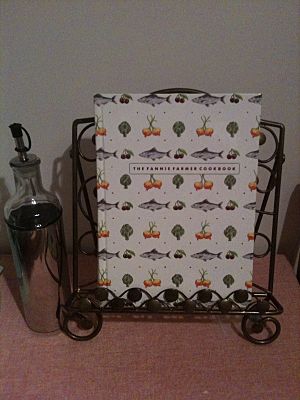 Fannie Farmer was born on 23 March 1857 in Boston, Massachusetts, United States, to Mary Watson Merritt and John Franklin Farmer, an editor and printer. Although she was the oldest of four daughters, born in a family that highly valued education and that expected young Fannie to go to college, she suffered a paralytic stroke at the age of 16 while attending Medford High School. Fannie could not continue her formal academic education; for several years, she was unable to walk and remained in her parents' care at home. During this time, Farmer took up cooking, eventually turning her mother's home into a boarding house that developed a reputation for the quality of the meals it served.

At the age of 30, Farmer, now walking (but with a substantial limp that never left her), enrolled in the Boston Cooking School at the suggestion of Mrs. Charles Shaw. Farmer trained at the school until 1889 during the height of the domestic science movement, learning what were then considered the most critical elements of the science, including nutrition and diet for the well, convalescent cookery, techniques of cleaning and sanitation, chemical analysis of food, techniques of cooking and baking, and household management. Farmer was considered one of the school's top students. She was then kept on as assistant to the director. In 1891, she took the position of school principal.

The book's publisher (Little, Brown & Company) did not predict good sales and limited the first edition to 3,000 copies, published at the author's expense. The book was so popular in America, so thorough, and so comprehensive that cooks would refer to later editions simply as the Fannie Farmer Cookbook, and it is still available in print over 100 years later.

Farmer left the Boston Cooking School in 1902 and created Miss Farmer's School of Cookery. She began by teaching gentlewomen and housewives the rudiments of plain and fancy cooking, but her interests eventually led her to develop a complete work of diet and nutrition for the ill, titled Food and Cookery for the Sick and Convalescent which contained thirty pages on diabetes. Farmer was invited to lecture at Harvard Medical School and began teaching convalescent diet and nutrition to doctors and nurses. She felt so strongly about the significance of proper food for the sick that she believed she would be remembered chiefly by her work in that field, as opposed to her work in household and fancy cookery. Farmer understood perhaps better than anyone else at the time the value of appearance, taste, and presentation of sickroom food to ill and wasted people with poor appetites; she ranked these qualities over cost and nutritional value in importance.

During the last seven years of her life, Farmer used a wheelchair. Despite her immobility, Farmer continued to lecture, write, and invent recipes; she gave her last lecture 10 days before her death. The Boston Evening Transcript published her lectures, which were picked up by newspapers nationwide. Farmer also lectured to nurses and dietitians, and taught a course on dietary preparation at Harvard Medical School. To many chefs and good home cooks in America, her name remains synonymous today with precision, organization, and good food.

In 1915, age 57, Fannie Farmer died of complications of a stroke, and was interred in Mount Auburn Cemetery, Cambridge, Massachusetts. In 2018, The New York Times published a belated obituary for her.

All content from Kiddle encyclopedia articles (including the article images and facts) can be freely used under Attribution-ShareAlike license, unless stated otherwise. Cite this article:
Fannie Farmer Facts for Kids. Kiddle Encyclopedia.