Kids Encyclopedia Facts
Not to be confused with Milquetoast. 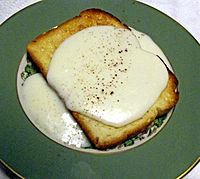 Milk toast is a breakfast dish consisting of toasted bread in warm milk, typically with sugar and butter. Salt, pepper, paprika, cinnamon, cocoa, raisins and other ingredients may be added. In the New England region of the United States, milk toast refers to toast that has been dipped in a milk-based white sauce.

Milk toast was a popular food throughout the late 19th and early 20th centuries, especially for young children and for the convalescent, for whom the dish was thought to be soothing and easy to digest. Although not as popular in the 2000s, milk toast is still considered a comfort food.

The food writer M. F. K. Fisher (1908–1992) called milk toast a "warm, mild, soothing thing, full of innocent strength", and wrote, of eating milk toast in a famed restaurant with a convalescent friend, that the dish was "a small modern miracle of gastronomy". She notes that her homeliest kitchen manuals even list it under "Feeding The Sick" or "Invalid Recipes", arguing that milk toast was "an instinctive palliative, something like boiled water". Fisher also notes that for true comfort, a ritual may be necessary, and for "Milk Toast people", the dish used may be foolishly important. Her favorite version of milk toast has the milk mixed 50/50 with Campbell's condensed cream of tomato soup in a wide-lipped pitcher called a boccalino in Italian Switzerland where she got it. 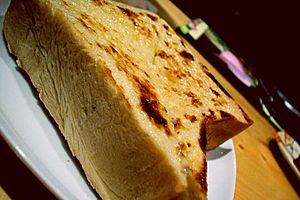 Milk toast is a dessert that is served in many Asian milk tea cafes. It consists of thick, enriched toasted white bread with condensed milk on top.

Masonica, or popara, is a dessert similar to milk toast which can be served at any time of the day. It is often made with fresh warm milk and day-old bread.

In Norway and Sweden

A traditional Scandinavian dish similar to milk toast is called soll in Norwegian and bryta in Swedish. It consists of broken flatbrød (wafer-thin, crisp bread), tunnbröd or dry bread served in a bowl of cold milk (often filmjölk) and sweetened with sugar etc. Soll was an everyday dish for peasants in the countryside, especially served as a simple supper in the evening. During the winter soll was sometimes served as breakfast with warmed milk.

In the Southwestern United States

In New Mexican cuisine, milk toast is referred to as leche cocida, meaning 'cooked milk'. Toasted bread is torn into chunks and placed in a bowl. Milk is cooked with a small amount of butter, salt, and pepper before it is poured over the bread. It is a meal associated with using up excess milk, perhaps from the days of milk man service.

All content from Kiddle encyclopedia articles (including the article images and facts) can be freely used under Attribution-ShareAlike license, unless stated otherwise. Cite this article:
Milk toast Facts for Kids. Kiddle Encyclopedia.