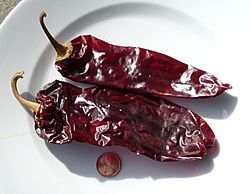 New Mexican cuisine is the cuisine of the Southwestern US state of New Mexico, the region is primarily known for its fusion of Pueblo Native American with Hispano Spanish and Mexican cuisine originating in Nuevo México.

This cuisine had adaptations and influences throughout its history, including early on from the nearby Apache, Navajo, and throughout New Spain and the Spanish Empire, also from French, Italian, Mediterranean, Portuguese cuisine, and European cafés, furthermore during the American territorial phase from cowboy chuckwagons and Western saloons, additionally after statehood from Route 66 American diners, fast food restaurants, and global cuisine.

Even so, New Mexican cuisine developed in fairly isolated circumstances, which has allowed it to maintain its indigenous, Spanish, and Mexican identity, and is therefore not like any other Latin food originating in the contiguous United States.

It can be easily distinguished from other Mexican and American cuisines, due to its emphasis on New Mexican spices, herbs, and flavors; especially red and/or green New Mexico chile peppers, anise (used in bizcochitos), and piñon (used as a snack or in desserts). 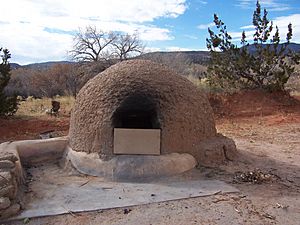 Prior to the establishment of New Mexico's current boundaries, Santa Fe de Nuevo México's land claim encompassed the Pueblo peoples and also oversaw the land of the Chiricahua, Comanche, Mescalero, and Navajo.

The Spaniards brought their cuisine which mingled with the indigenous. They introduced wheat, rice, beef, mutton/lamb, among other foods and flavors, to the native corn, chile, beans, squash, and other indigenous ingredients.

During this early development period the horno, an outdoor beehive-shaped earth oven, became ubiquitous in Pueblo and Hispano communities. This distinct history, combined with the local terrain and climate, has resulted in significant differences between the cuisine of New Mexico and somewhat similar styles in Northern Mexico, and other Southwestern US states such as California, Arizona, and Texas.

New Mexico's population includes Native Americans who have been worked the land thousands of years, including the farms of the Ancestral Pueblo peoples as well as the modern extant Pueblo, Navajo and Apache. The Hispano explorers included farmers and ranchers as the arrived during Spanish era in the 16th century, well into the Mexican era which ended in the 19th century.

Americans traded and settled after the Civil War, today groups from Asian and communities have come to New Mexico.

When New Mexicans refer to chile they are talking about pungent pods, or sauce made from those pods, not the concoction of spices, meat or beans known as Texas chili con carne. While the chile pod is sometimes spelled chili outside of New Mexico, US Senator Pete Domenici of New Mexico made this state's spelling official as chile, by entering it into the Congressional Record.

One of the first authors to publish a cookbook describing traditional New Mexican cuisine was educator and writer Fabiola Cabeza de Baca Gilbert, who published Historic Cookery in 1931. Her work helped introduce cooking with chiles to the United States more broadly. 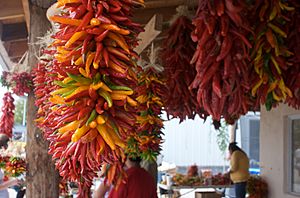 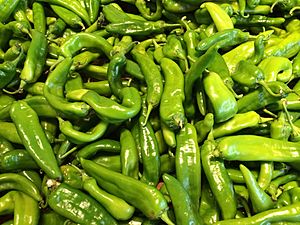 The New Mexico official State Question is "Red or green?" This refers to the choice of red or green chile with an entrée. "Christmas," a relatively new tradition originating in the 1980s, is a request for both (one side covered with green, the other with red). New Mexico red and green chile have such a rich and distinctive flavor that traditional preparations require few additional flavoring ingredients. The essence of New Mexico chile preparation is its simplicity.

The New Mexico green chile is a variety of the chile pepper, Capsicum annuum, and was developed as a recognizable strain in New Mexico by the late nineteenth century. It is available today in several distinct and selectively-cultivated strains called cultivars.

The chile pepper is grown in the state's very high altitude (4,000–8,000 ft) and dry, hot climate. Much like grapes for wine, these growing conditions contribute, along with genetics, to giving New Mexico green chile its distinctive deep green color, texture, and flavor.

The climate of New Mexico tends to increase the capsaicin levels in the chile pod compared to pods grown in other regions. This results in the possibility of hotter varieties. New Mexico green chiles can range from mild to extremely hot.

At harvest time (August through the middle of October) green chile is typically roasted, peeled and frozen for the year ahead. Chile is such a staple in New Mexico that many national restaurant chains offer New Mexico chile at their New Mexico locations.

New Mexico red chile is simply the fully ripened green chile pepper. As it ripens, it first turns orange and then quickly turns red. As it does so, the skin thickens and fuses to the inner fruit or "meat" of the pepper. This means that, for the red pepper to be enjoyable, it must first be dried then blended into a puree. The puree can be made using full red chile pods or red chile powder (which is made by finely grinding the dried pod).

The purée is not edible until cooked as red chile sauce. This is made by cooking the puree with garlic, salt—and occasionally oregano—and has the consistency of tomato soup. Discerning native New Mexicans prefer sun-dried over oven-dried red chile, as the oven-drying process gives it a non-traditional smoky flavor and a dark maroon color.

Red chile peppers are traditionally sun-dried in bundles called ristras, which are a common decorative sight on porches and in homes and businesses throughout the Southwest. The process of creating the ristra is highly labor-intensive, so in recent decades it has become a predominantly decorative item.

The bulk of New Mexico chile is grown in the Hatch Valley in the south of the state, in and around the village of Hatch. It is also grown along the entire Rio Grande Valley, and Chimayo in the north is also well known for its chile. 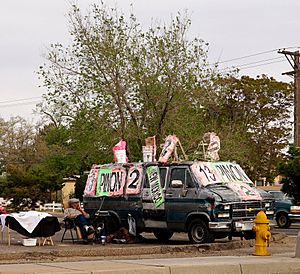 Piñones, or piñon nuts, are a traditional food of Native Americans and Hispanos in New Mexico that is harvested from the ubiquitous piñon pine tree. The state of New Mexico protects the use of the word piñon for use with pine nuts from certain species of indigenous New Mexican pines. The harvest doesn’t generally arrive in full force until after New Mexico’s first freeze of the winter. 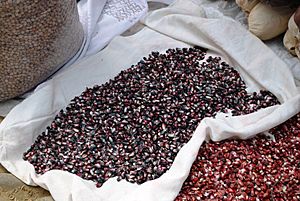 Corn (maize) remains a staple grain, the yellow sweet corn variety is most common in New Mexico, though white is sometimes used, and blue and red flint corn varieties are used for specialties like atole and blue-corn tortilla chips. Kernel corn and corn on the cob are frequent side dishes, as in the American South.

Corn is not a frequent component of New Mexico salsa or pico de gallo, and is usually a separate side dish in and of itself.

Anise is common in some desserts, especially the state cookie, the bizcochito.

Cilantro, a pungent green herb (also called Mexican or Chinese parsley, the seeds of which are known as coriander) used fresh in salsas, and as a topping for virtually any dish; not common in traditional New Mexican cuisine, but one of the defining tastes of Santa Fe style.

Cumin, the quintessential "Mexican food" spice, is used very differently in New Mexican food, usually reserved for spicing ground beef and sometimes other meats for burritos, tacos, and nachos. It is not used to flavor red and green chile sauces. Oregano is a sparingly used but common herb used in traditional New Mexican dishes.

The early Spanish Colonies along the Rio Grande River in New Mexico used safflower as a substitute for saffron in traditional recipes. An heirloom variety originating from Corrales, New Mexico, called "Corrales Azafran" is still cultivated and used as a saffron substitute in New Mexican cuisine. 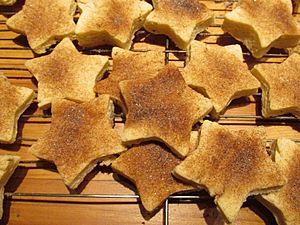 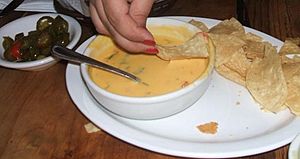 Chimichangas, like flautas and taquitos, are a fast-food adaptation of traditional dishes in a form that can be stored frozen and then quickly fried as needed; they are also rigid and easily hand-held, and thus easy to eat by people while walking or driving. 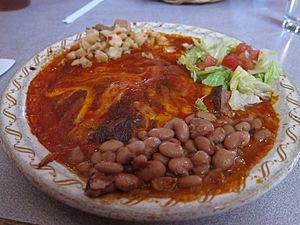 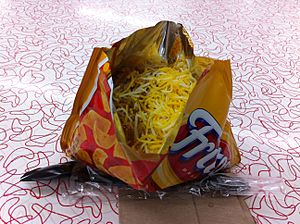 Some five-and-dime stores make it by slicing open a bag of Frito's and adding the rest of the ingredients.
Although a Texas invention, it has become popular in New Mexico, and typically uses New Mexican red chile in the state.

The green-chile variant usually is mostly green chile and without tomatoes, though some varieties may use some cooked tomatillos; the style does not use avocado (which is very common in California green salsa).
The New Mexico and California styles share a typically large amount of cilantro added to the mix. The word simply means "sauce" in Spanish.

Its place in Mexican, Tex-Mex and Californian food, where it is extremely common, especially as a final condiment to add more heat, has largely been supplanted by chile, especially red chile, in New Mexican cuisine.

The term can also refers to the soft, rolled flour-tortilla variety popularized by fast-food chains (a soft taco), and the flat, unfried corn style favored in Mexico, but most corn tortillas for tacos are fried in New Mexican cuisine.
The entire taco is not fried (a Mexican style known as taco dorado), just the shell. Compare taquito, tostada.

Although there are many delicious variations, the standard New Mexico tamal filling is shredded pork cooked in red chile sauce. New-Mexican tamales typically vary from other tamal styles in that red chile powder is typically blended into the masa.

It is a traditional dish for Fridays during Lent; some New Mexican restaurants offer it as their Lenten special.

All content from Kiddle encyclopedia articles (including the article images and facts) can be freely used under Attribution-ShareAlike license, unless stated otherwise. Cite this article:
New Mexican cuisine Facts for Kids. Kiddle Encyclopedia.