Chimayó is a census-designated place (CDP) in Rio Arriba and Santa Fe counties in the U.S. state of New Mexico. The name is derived from a Tewa name for a local landmark, the hill of Tsi Mayoh. The town is unincorporated and includes many neighborhoods, called plazas or placitas, each with its own name, including El Potrero de Chimayó (the plaza near Chimayó's communal pasture) and the Plaza del Cerro (plaza by the hill). The cluster of plazas called Chimayó lies near Santa Cruz, approximately 25 miles north of Santa Fe. The population was 3,177 at the 2010 census.

The Potrero plaza of Chimayó is known internationally for a Catholic chapel, the Santuario de Nuestro Señor de Esquipulas, commonly known as El Santuario de Chimayó. A private individual built it by 1816 so that local people could worship Jesus as depicted at Esquipulas; preservationists bought it and handed it over to the Archdiocese of Santa Fe in 1929. The chapel is now managed by the Archdiocese as a Catholic church. For its reputation as a healing site (believers claim that dirt from a back room of the church can heal physical and spiritual ills), it has become known as the "Lourdes of America," and attracts close to 300,000 visitors a year, including up to 30,000 during Holy Week (the week prior to Easter). It has been called "no doubt the most important Catholic pilgrimage center in the United States." The sanctuary was designated a National Historic Landmark in 1970.

Chimayó is also known for the weaving traditions of the Ortega and Trujillo families, who have been weaving in the Spanish Colonial tradition for many generations and now operate weaving businesses near the Plaza del Cerro and in the placita of Centinela. Their traditional craft is but one of several still practiced in the region, including tin smithing, wood carving, and making religious paintings. These activities, along with the local architecture and the landscape of irrigated fields, create a historic ambiance that attracts much tourism.

The town is also famous for its heirloom chile (Capsicum annuum "Chimayo"). In 2003 the Native Hispanic Institute's founder Marie Pilar Campos authored the Chimayo Chile Project to replenish the 300-year-old native seed stock and revive the industry. The Chimayo Chile Project began planting in the spring of 2005, which is the foundation of its ongoing seed-distribution services to local farmers. The project's job development operations were funded by the United States Office of Community Services from 2005 through 2008. As part of the project's work with the state to revive the industry, two joint memorials have passed the New Mexico State Legislature. The Chimayo Chile Project incorporated the local farmers, Chimayo Chile Farmers, Inc. Chimayo Chile Farmers, Inc. applied for the certification mark "Chimayo" with the USPTO in 2006 and was granted registration in 2009. The 2008 New Mexico State Legislature, via New Mexico Department of Cultural Affairs, appropriated preservation support that resulted in the June 2009 publication, "Chimayo Chile, A Living History of Faith, Culture, and Art," written by Marie Pilar Campos of the Native Hispanic Institute.

Chimayó figures prominently in Now Eleanor's Idea, an opera by Robert Ashley. Ashley describes Chimayó in his foreword to the libretto as "the spiritual center of the lowrider world... Now Eleanor conceives of a television documentary program to study the exotic lowrider community... in the car shops" of Chimayo. Act II, Scene 2 is a recorded interview with Chimayó residents LowLow and Joan Medina. 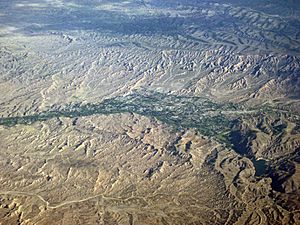 Chimayó is sited in a valley within the Sangre de Cristo Mountains 24 miles (38.4 km) north of Santa Fe. Chimayó is approximately 6075 ft above sea level.

According to the United States Census Bureau, the CDP has a total area of 5.5 square miles (14.1 km²), all land.

Chimayó is in Española Public Schools. It has an elementary school, Chimayó Elementary. The comprehensive public high school is Española Valley High School.

All content from Kiddle encyclopedia articles (including the article images and facts) can be freely used under Attribution-ShareAlike license, unless stated otherwise. Cite this article:
Chimayo, New Mexico Facts for Kids. Kiddle Encyclopedia.