The Sangre de Cristo Mountains (Spanish for "Blood of Christ") are the southernmost subrange of the Rocky Mountains. They are located in southern Colorado and northern New Mexico in the United States. The mountains run from Poncha Pass in South-Central Colorado, trending southeast and south, ending at Glorieta Pass, southeast of Santa Fe, New Mexico. The mountains contain a number of fourteen thousand foot peaks in the Colorado portion, as well as all the peaks in New Mexico which are over thirteen thousand feet.

The name of the mountains may refer to the occasional reddish hues observed during sunrise and sunset, and when alpenglow occurs, especially when the mountains are covered with snow. Although the particular origin of the name is unclear, it has been in use since the early 19th century. Before that time the terms "La Sierra Nevada", "La Sierra Madre", "La Sierra", and "The Snowies" (used by English speakers) were used. According to tradition, "sangre de Cristo" were the last words of a priest who was killed by Native Americans.

Sangre de Cristo Mountains to the East of Santa Fe, taken during a winter sunset after a snowfall on 29 January 2013 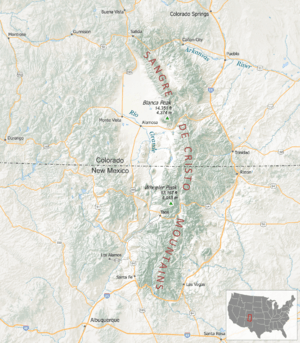 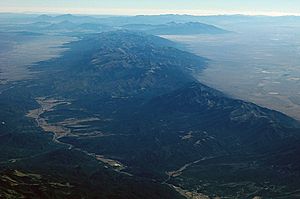 Much of the mountains are within various National Forests: the Rio Grande and San Isabel in Colorado, and the Carson and Santa Fe in New Mexico. These publicly accessible areas are managed by the United States Forest Service and are popular for hunting, camping, hiking, mountain biking, backpacking, climbing, and cross-country and downhill skiing.

The Sangre de Cristo Range, the largest and most northerly subrange of the Sangre de Cristo Mountains, runs directly along the east side of the Rio Grande Rift, extending southeast from Poncha Pass for about 75 miles (120 km) through south-central Colorado to La Veta Pass, approximately 20 miles (32 km) west of Walsenburg. They form a high ridge separating the San Luis Valley on the west from the watershed of the Arkansas River on the east.

The Culebra Range runs almost due north and south, with its northern limit at La Veta Pass in Colorado, and its southern limit at Costilla Creek, just south of Big Costilla Peak in New Mexico. Its highest point is Culebra Peak at 14,047 ft (4,282 m), which is notable for being the only fourteener in Colorado which is on private land. Climbers wishing to ascend Culebra must pay a fee (currently US$100 per person), and the number of climbers per year is limited. It is also the most southerly fourteener in the U.S. Rockies. Standing to the east of the main crest are the two prominent Spanish Peaks (West: 13,626 ft (4,153 m), East: 12,860 ft (3,920 m)). These peaks were important landmarks on the mountain branch of the Santa Fe Trail.The bioregion receives very little water and has an annual precipitation of seven to eight inches (180 to 200 mm).This region is also home to the Culebra Micro-basin which has a rich agricultural history in the state of Colorado.

Taos Ski Valley lies just to the west of Wheeler Peak. Much of the central portion of the Taos Mountains is on Taos Pueblo land. As viewed from Taos, they are locally called "Taos Mountain."

The southern portion of the Taos Mountains, between Palo Flechado Pass and Tres Ritos (U.S. Route 64 and NM Route 518), is lower and less dramatic than the northern section, with its high point being Cerro Vista, 11,939 ft (3,639 m). The Fernando Mountains are a small subrange lying in this section, just south of US Route 64.

The Cimarron Range lies across the Moreno Valley to the east of the Taos Mountains. It is a lower range, with its highest point being Baldy Mountain at 12,441 ft (3,792 m). The Philmont Scout Ranch lies on the east side of the Cimarron Range.

This is a minor subrange, significantly lower than the rest of the Sangre de Cristos; it lies east of the southernmost portion of the Taos Mountains.

Rounding out the Sangre de Cristo Mountains are the Santa Fe Mountains, which include all peaks south of NM Route 518. This group lies near Santa Fe and surrounds the Pecos Wilderness, which protects the source watershed of the Pecos River. The peaks include Truchas Peak, 13,102 ft (3,993 m), as their highest point. Other notable peaks are Santa Fe Baldy (12,622 ft (3,847 m)) and Jicarita Peak (12,835 ft (3,912 m)). The Pecos Wilderness is crossed by many trails and is popular for backpacking and for fishing in its high alpine lakes.

The Sangre de Cristo Mountains were uplifted during the Cenozoic Laramide orogeny. They are bounded on the west by the Rio Grande rift and on the east by a series of reverse and thrust faults. Vertical displacement along the faults is at least 4,200 metres (13,800 ft), and gravity measurements suggest the uplift has been thrust eastward great distances. This faulting places Precambrian basement rock in contact with sedimentary strata along the eastern margin of the uplift except where igneous rocks have been intruded along the fault.

All content from Kiddle encyclopedia articles (including the article images and facts) can be freely used under Attribution-ShareAlike license, unless stated otherwise. Cite this article:
Sangre de Cristo Mountains Facts for Kids. Kiddle Encyclopedia.