The Pecos River (Spanish: Río Pecos) originates in north-central New Mexico and flows into Texas, emptying into the Rio Grande. Its headwaters are on the eastern slope of the Sangre de Cristo mountain range in Mora County north of Pecos, NM, at an elevation of over 12,000 feet (3,700 m) feet. The river flows for 926 miles (1,490 km) before reaching the Rio Grande near Del Rio. Its drainage basin encompasses about 44,300 square miles (115,000 km2).

The name "Pecos" derives from the Keresan (Native American language) term for the Pecos Pueblo, [p'æyok'ona]. The river was also historically referred to as the Río Natagés for the Mescalero people.

The river played a large role in the exploration of Texas by the Spanish. In the latter half of the 19th century, "West of the Pecos" was a reference to the rugged desolation of the Wild West. The Texas storekeeper, bartender, and justice of the peace, Roy Bean, a native of Kentucky, was often described as "The Only Law West of the Pecos", a phrase made popular from the 1956 syndicated television series, Judge Roy Bean, with Edgar Buchanan in the starring role. In the series narration, "West of the Pecos" is described as:

the wildest spot in the United States ... virtually beyond the reach of the authorities, the railroads, then pushing their way west, attracted the most vicious characters in the country. It was said that all civilization and law stopped at the east bank of the Pecos. It took one man, a lone storekeeper who was sick of the lawlessness, to change all this. His name was Judge Roy Bean."

Multiple dams have been built along the Pecos River. Santa Rosa Lake is 117 miles/188 km east of Albuquerque. Sumner Lake, formed by the 1939 Sumner Dam, is located between Santa Rosa and Fort Sumner, NM. Two dams are located north of Carlsbad, New Mexico, at Avalon Dam and Brantley Dam, to help irrigate about 25,000 acres (10,000 ha) as part of the Carlsbad reclamation project (established in 1906). Texas has also dammed the river at the Red Bluff Dam in the western part of that state to form the Red Bluff Reservoir. The portion of the reservoir that extends into New Mexico forms the lowest point in that state.

On June 6, 1990, 20.5 miles (33 km) of the Pecos River—from its headwaters to the townsite of Tererro—received National Wild and Scenic River designation. It includes 13.5 miles (22 km) designated "wild" and 7 miles (11 km) designated "recreational". 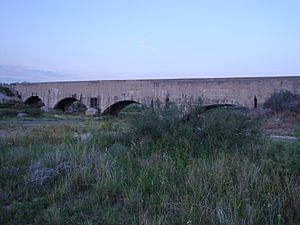 The Pecos River Flume is an aqueduct carrying irrigation water over the Pecos River. Construction took place from 1889 to 1890 and was part of the Pecos River Reclamation Project. It was originally constructed of wood and spanned 145 feet (44 m). It carried water at a depth of 8 feet (2.4 m). In 1902, a flood destroyed the flume and it was subsequently rebuilt using concrete. In 1902, it was identified as the largest concrete aqueduct in the world.

The flume and its surrounding area have been reclaimed by the city of Carlsbad and transformed into a tourist attraction, with park improvements along the river and spotlights to give a spectacular nightly view.

All content from Kiddle encyclopedia articles (including the article images and facts) can be freely used under Attribution-ShareAlike license, unless stated otherwise. Cite this article:
Pecos River Facts for Kids. Kiddle Encyclopedia.