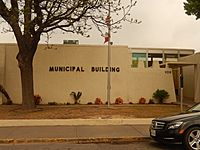 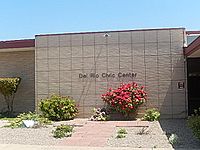 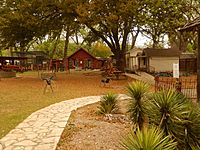 Glimpse of the Whitehead Memorial Museum in Del Rio 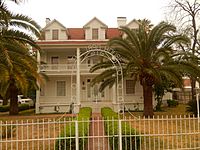 The 1890 House at 609 Griner St. in Del Rio is a bed and breakfast inn operated by Laura Galvan. 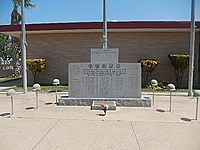 Del Rio is a city in and the county seat of Val Verde County, Texas . It is one hundred fifty-two miles west of San Antonio. As of 2015, the city had a population of 40,549. Del Rio is connected with Ciudad Acuña via the Lake Amistad Dam International Crossing and Del Río – Ciudad Acuña International Bridge. Del Rio is also home to Laughlin Air Force Base, the busiest United States Air Force pilot training complex in the world.

The San Felipe Springs, about 8 mi (13 km) east of the Rio Grande on the U.S. side of the border, produces 90×10^6 US gal (340,000 m3) of water a day. Developers acquired several thousand acres of land adjacent to the springs, and to San Felipe Creek formed by the springs, from the State of Texas in exchange for building a canal system to irrigate the area. The developers sold tracts of land surrounding the canals to recover their investment and show a profit. The initial investors (William C. Adams, John P. Grove, Donald Jackson, John Perry, Joseph Ney, Randolph Pafford, A. O. Strickland, and James H Taylor) formed the San Felipe Agricultural, Manufacturing, and Irrigation Company in 1868. The organization completed construction of a network of irrigation canals in 1871. Residents referred to the slowly developing town as San Felipe Del Rio because local lore said the name came from early Spanish explorers who offered a Mass at the site on St. Philip's Day, 1635.

The San Felipe community was started by the Arteaga family. Arteaga Street and Arteaga Park are named after them.

Many history items from Del Rio, particularly from the 19th century, are preserved at the Whitehead Memorial Museum downtown.

Del Rio is known as the American address of legendary Mexican radio stations XERA and XERF just over the U.S.-Mexico border in Ciudad Acuña; their 500,000-watt signals could be heard at night as far away as Canada. Legendary deejay Wolfman Jack operated XERF in the 1960s, using a Del Rio address to sell various products advertised on the station.

In 1942, the Army Air Corps opened Laughlin Field 9 mi (14 km) east of Del Rio as a training base for the Martin B-26, but it was deactivated in 1945. As the Cold War pressures built, along with new border control issues, Laughlin Field was rebuilt and renamed Laughlin Air Force Base. It was again used as a home for flight training. In the mid-1950s, the Strategic Air Command (SAC) noted Laughlin's remoteness that allowed for secret operations, and opened its strategic reconnaissance program there with the RB-57, a bomber modified for high-altitude reconnaissance. SAC soon transitioned to the high-altitude U-2 Dragonlady and based all of them in Laughlin AFB. In 1962, Laughlin-based U-2s took the first photographs of land-based medium-range ballistic missile sites being constructed in Cuba. The presence of these missiles precipitated what became known as "the Cuban Missile Crisis." The U-2s were relocated to Davis–Monthan Air Force Base near Tucson, Arizona, in July 1963, and Laughlin's mission transitioned to the Undergraduate Pilot Training mission in the T-37 and T-38 aircraft. Laughlin AFB currently provides training in the T-1A Jayhawk, the T-6A Texan II, and the T-38 aircraft.

Laughlin plays a large part in the Del Rio community as the area's largest employer. The Border Patrol is the city's second-largest employer (with two large stations along with the sector headquarters). At one time, Del Rio was in the running to become the home of the Federal Law Enforcement Training Center for agents of the U.S. Border Patrol and Federal Air Marshal Service, but lost to the current site in Artesia, New Mexico. The proposed site was located on property belonging to Laughlin AFB. Since the base has unused land, the Air Force is able to lease it to other federal law enforcement agencies for such projects. This benefits Laughlin AFB and the city of Del Rio both financially and economically. Del Rio was one of five cities in the United States selected for an FBI regional headquarters' office; the building is adjacent to the six-story Roswell Hotel in downtown Del Rio.

Del Rio lies on the northwestern edges of the Tamaulipan mezquital, also called the South Texas brush country. It is also near the southwestern corner of the Edwards Plateau, which is the western fringe of the famous, oak savanna-covered Texas Hill Country; that area is dotted with numerous small springs; one of these is the San Felipe Springs, which provides a constant flow of water to San Felipe Creek. The creek supplied fresh water for drinking and irrigation to early settlers of Del Rio, and the springs are still the town's water supply.

The Del Rio region, west to about the Pecos River, has a mix of desert shrub and steppe vegetation, depending on soil type, with the gray-leafed cenizo (Leucophyllum spp.), several different acacias, cacti, and grama grasses dominant members of local flora. The terrain is mostly level, but some areas are dissected with substantial canyons and drainages, though none of the upland areas are high or large enough to be considered mountains. 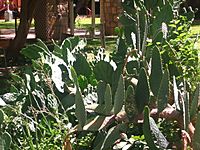 Cactus grows in the semiarid climate of Del Rio.

The climate is semiarid in moisture and subtropical in temperature. Humidity is more often high than low, with periodic morning fog due to Gulf of Mexico air masses moving northwest into the area. This gives Del Rio and adjacent areas the effect of being in a coastal dryland area, even though the Gulf of Mexico is over 300 mi (480 km) away. Such humid periods alternate with periods of hot and dry desert air masses in the spring and fall, or cold and dry Great Plains air masses during winter. Moisture rarely lasts long enough for weather systems to react with it to create much precipitation, as happens more frequently to the north and east of the area; some exceptions occur during some autumn (tropical weather systems) and spring (stalled fronts to the north).

Summers are long, hot, and frequently humid; winters vary between sunny, warm, cloudy, and cool weather, depending on the wind direction and jet stream location. Snow or freezing rain is rare, about every seven to ten years, and such wintry precipitation does not last long enough to be of consequence. The coldest temperature recorded in Del Rio is 10 °F (−12.2 °C) on December 23, 1989, and the average window for freezing temperatures is December 2 to February 20. The most snowfall in a month is 9.8 inches (0.25 m) in January 1985, and that total is also the highest for any entire season. 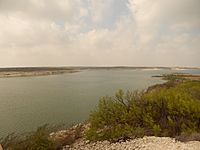 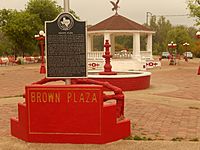 Brown Plaza in Del Rio is named for its donor, George Washington Brown (1836–1918), both a county and district clerk originally from North Carolina. The plaza was restored in 1969. 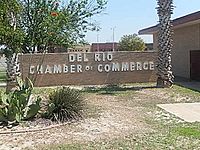 Del Rio Chamber of Commerce is located by the Civic Center. 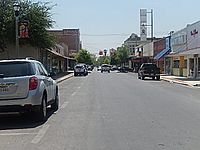 A glimpse of downtown Del Rio 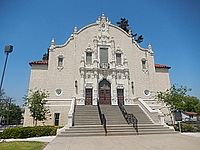 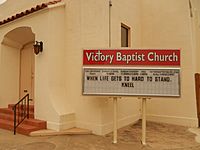 Victory Baptist An Independent Baptist congregation, with an obvious grammar mistake in the message

Del Rio is the principal city of the Del Rio Micropolitan Statistical Area, which includes all of Val Verde County; the micropolitan area had an estimated population of over 50,000 in 2007. Located across from Del Rio, in the Mexican state of Coahuila, is the city of Ciudad Acuña with a city population of 181,426.

Lake Amistad provides year-round, water-based recreation opportunities, including boating, fishing, swimming, scuba diving and water-skiing, as well as other recreational opportunities for picnicking, camping, and hunting. The area is rich in archeology and rock art, and contains a wide variety of plant and animal life. Del Rio is home to the George Paul Memorial Bullriding, which is the oldest stand-alone bull riding event in the world.

The United League Baseball is looking into placing an expansion franchise in Del Rio for the 2014 season. Home games will be played at Del Rio Bank and Trust Ram Stadium (formerly Roosevelt Park); the stadium is going through a renovation and seating expansion project. A future minor-league baseball stadium is being proposed to be built at the Val Verde Fairground Complex.

Del Rio in film and television

In the episode "The Young Gun" (February 7, 1958) of the CBS western television series Trackdown, starring Robert Culp as the Texas Ranger Hoby Gilman, the Ranger travels to Del Rio to investigate a bank robbery and goes undercover to gain inside information to solve the case. He tricks one of the robbers to lead him to the other gang members.

The 1994 motion picture Texas, based on the James A. Michener novel Texas, was partly filmed in Del Rio. The movie, which took place in the beginning of the 19th century as many Anglo Americans were settling in the Mexican province of Texas, featured Randy Travis and Anthony Michael Hall.

Del Rio features prominently (even though scenes were shot elsewhere) in No Country for Old Men, the 2007 neo-Western thriller film directed, written, and edited by Joel and Ethan Coen, based on the Cormac McCarthy novel of the same name.

Other presentations with a Del Rio setting include:

Barrio Chihuahua: In the southern part of the city, this neighborhood, named after the Chihuahua Soccer Field, is located between West Gibbs to the north, Texas State Spur 29 to the west, Garfield Ave., West Garfield to the southeast, and S. Ave F to the far east.

Cienegas Terraces: Outside the city limits, it is home to the "Duck Pond" and various ranches, on the west side of the city.

San Felipe: The original neighborhood in Del Rio, the city originally got its name from it as in "San Felipe del rio", south of Barrio Chihuahua and the Northside. Anywhere south of Chihuahua but not past San Felipe Creek is known as The Winery, due to its close proximity to Val Verde Winery, the oldest privately owned winery still operating in the United States.

Westside: Home to Del Rio International Airport, the neighborhood is surrounded to the north by W. 15th, 18th, and 17th Streets, to the east by Veterans Blvd., and to the south by W. Gibbs bordering Chihuahua.

Comalia: A neighborhood isolated by the Woodlawn cemetery and a bridge that leads to the U.S.-Mexico border crossing, it can be found by traveling down W. 2nd Street.

All content from Kiddle encyclopedia articles (including the article images and facts) can be freely used under Attribution-ShareAlike license, unless stated otherwise. Cite this article:
Del Rio, Texas Facts for Kids. Kiddle Encyclopedia.