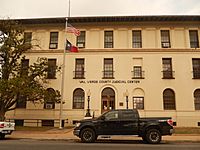 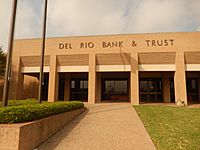 Del Rio Bank and Trust Company was organized in 1910. The bank is hence a year older than the Del Rio city government and has served Val Verde County for more than a century. The photo is the facility at 1200 Veterans Blvd.; another location is 22411 N Bedell Ave.

Val Verde County is a county located on the southern Edwards Plateau in the U.S. state of Texas. The 2014 population is 51,047. Its county seat is Del Rio. In 1936, Val Verde County received Recorded Texas Historic Landmark number 5625 to commemorate its founding.

Val Verde, which means "green valley", was named for a battle of the American Civil War. In 1862, soldiers of Sibley's Brigade took part in the Texas invasion of New Mexico Territory, where they captured several artillery pieces at the Battle of Val Verde. The battle is memorialized both in the name of the county and a small settlement in Milam County.

All content from Kiddle encyclopedia articles (including the article images and facts) can be freely used under Attribution-ShareAlike license, unless stated otherwise. Cite this article:
Val Verde County, Texas Facts for Kids. Kiddle Encyclopedia.