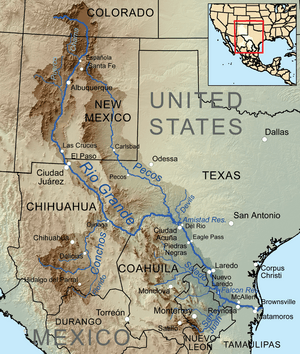 The Devils River is considered the most unspoiled river in Texas. Its remote location in a hostile environment limits pollution from human and domestic animal populations. In addition, the river flows underground for part of its journey. As it passes underground, the gravel, sand and limestone scrub the river water clean before it re-emerges some 20 miles (32 km) downstream.

The Devils River Conservancy is a 501(c)3 organization dedicated to the protection and preservation of the Devils River for future generations of Texans and works throughout the basin to promote conservation ethics among landowners and paddlers.

The river itself is 90 miles (140 km) long, but much of the upper half of the river is not suitable for canoeing or kayaking because of a lack of water and limited access. The best part of the river for recreation is about 40 miles (64 km) long and runs from Bakers Crossing to the last drop off point at Lake Amistad. The most common point of entry into the river is Bakers Crossing on Texas State Highway 163. Camping sites are available and you can also leave your vehicle at Bakers Crossing. Most of the river is fairly calm with mostly class two rapids and small class three rapids (see International Scale of River Difficulty). However the river can rise and fall greatly with rainfall, even if the rain is not in the direct area of the river. Dolan Falls is a waterfall about 15 feet (4.6 m) tall and is located at about 16.9 miles (27.2 km) and must be avoided. Past Dolan Falls at about 19 miles (31 km) is Three Tier Rapids, a class four rapid most of the year, but when the river swells, can be a short class 5 and should be attempted by only the more experienced paddlers. The river is characterized by long, deep pools with reed covered rapids near the end of these pools. A map is strongly suggested as both Dolan Falls and Three Tier Rapids are not able to be seen until you are right on top of them. After Three Tier Rapids, there are no more large (over class III) rapids and the river is fairly smooth. Some boulder and fields do occur past Three Tier Rapids but are generally small in size. The river finally empties into Lake Amistad after traveling some 40 miles (64 km) from Bakers Crossing. From this point it is another 12-mile (19 km) trip on the lake to the last take out at Rough Canyon Marina. The journey for the lake section of the trip can be very strenuous on a person kayaking or canoeing because of the strong south headwind. 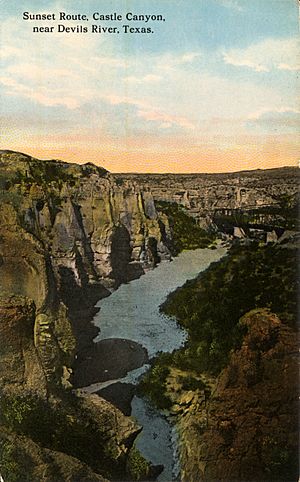 Part of the appeal of the river is its remote location, the very rugged and rough terrain, and lack of human presence. There are only five visible houses in the first 20 miles (32 km) of river. At about 25 miles (40 km) the Dry Devils River flows into the Devils, and is considered by many to be the halfway point. There are many homes in this point of the river and is called the Blue Sage Subdivision.

All content from Kiddle encyclopedia articles (including the article images and facts) can be freely used under Attribution-ShareAlike license, unless stated otherwise. Cite this article:
Devils River (Texas) Facts for Kids. Kiddle Encyclopedia.