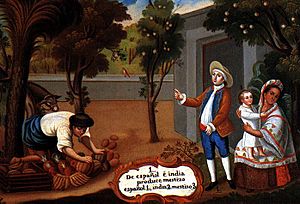 Mestizo (meh-STEE-tzo) is a Spanish term for a person who is of mixed European (usually Spanish) and Indigenous ancestry.

Indo-Mestizo (also known as Cholo) is a Spanish term for a person who is around 3/4 Native American and 1/4 Caucasian ancestry.

Indo-Mestizos are mostly found in Eastern and Southern Mexico, much of Northern Central America, Ecuador,south of Peru, and Bolivia

Famous Indo-Mestizos include Maya Zapata, George Lopez, and Danny Trejo. They are so called because of their appearance, not because of known genetic background.

All content from Kiddle encyclopedia articles (including the article images and facts) can be freely used under Attribution-ShareAlike license, unless stated otherwise. Cite this article:
Mestizo Facts for Kids. Kiddle Encyclopedia.