José Manuel Ramos-Horta GColIH GCL ( born 26 December 1949) is an East Timorese politician who is the president-elect of East Timor and is due to take office on 20 May 2022, having previously served as president from 20 May 2007 until 20 May 2012. Previously he was Minister of Foreign Affairs from 2002 to 2006 and Prime Minister from 2006 to 2007. He is a co-recipient of the 1996 Nobel Peace Prize, along with Carlos Filipe Ximenes Belo, for working "towards a just and peaceful solution to the conflict in East Timor".

After leaving office as President in 2012, Ramos-Horta was appointed as the United Nations' Special Representative and Head of the United Nations Integrated Peacebuilding Office in Guinea-Bissau (UNIOGBIS) on 2 January 2013. He stood as the candidate of the National Congress for Timorese Reconstruction in the 2022 election and ended up winning the runoff.

Of Mestiço ethnicity, Ramos-Horta was born in 1949 in Dili, capital of East Timor, to a Timorese mother and a Portuguese father who had been exiled to what was then Portuguese Timor by the Salazar dictatorship. He was educated in a Catholic mission in the small village of Soibada, later chosen by Fretilin as its headquarters after the Indonesian invasion. Of his eleven brothers and sisters, four were killed by the Indonesian military.

Ramos-Horta studied public international law at The Hague Academy of International Law in 1983 and at Antioch College in Yellow Springs, Ohio, where he completed a Master of Arts degree in peace studies, in 1984. He was trained in human rights law at the International Institute of Human Rights in Strasbourg in 1983. He completed post-graduate courses in American foreign policy at Columbia University in 1983. He is a Senior Associate Member of the University of Oxford's St Antony's College since 1987 and speaks five languages fluently: Portuguese, English, French, Spanish, and the most commonly spoken East Timorese language, Tetum.

Ramos-Horta is divorced from Ana Pessoa Pinto, East Timor's Minister for State and Internal Administration, with whom he has a son, Loro Horta, who was born in exile in Mozambique. 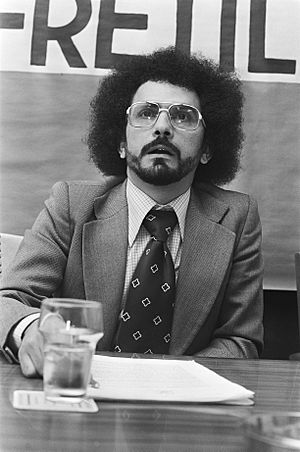 Ramos-Horta was actively involved in the development of political awareness in Portuguese Timor, which caused him to be exiled for two years in 1970–71 to Portuguese East Africa. His grandfather, before him, had also been exiled, from Portugal to the Azores Islands, then Cape Verde, Portuguese Guinea and finally to Portuguese Timor.

Ramos-Horta arrived in New York to address the UN Security Council and urge them to take action in the face of the Indonesian occupation during which an estimated 102,000 East Timorese would die. Ramos-Horta was the Permanent Representative of Fretilin to the UN for the next ten years. His friends at that time mentioned that he arrived in the United States with a total of $25 in his pocket. His financial situation was often precarious during that period. He survived partly by the grace of Americans who admired his politics and his determination. Furthermore, he was obliged to travel worldwide to explain his party's position.

In 1993, the Rafto Prize was awarded to the people of East Timor. Foreign-minister-in-exile Ramos-Horta represented his nation at the prize ceremony. In May 1994, Philippine President Fidel Ramos (no relation), bowing to pressure from Jakarta, tried to ban an international conference on East Timor in Manila and blacklisted Ramos-Horta, with the Thai government following suit later that year by declaring him persona non grata.

In December 1996, Ramos-Horta shared the Nobel Peace Prize with fellow Timorese Bishop Ximenes Belo. The Nobel Committee chose to honour the two laureates for their "sustained efforts to hinder the oppression of a small people", hoping that "this award will spur efforts to find a diplomatic solution to the conflict of East Timor based on the people's right to self-determination". The Committee considered Ramos-Horta "the leading international spokesman for East Timor's cause since 1975".

Ramos-Horta played a leading role in negotiating the institutional foundations for independence. He led the Timorese delegation at an important joint workshop with UNTAET on 1 March 2000 to tease out a new strategy, and identify institutional needs. The outcome was an agreed blueprint for a joint administration with executive powers, including leaders of the National Congress for Timorese Reconstruction (CNRT). Further details were worked out in a conference in May 2000. The Special Representative of the UN Secretary-General in East Timor, Sérgio Vieira de Mello, presented the new blueprint to a donor conference in Lisbon, on 22 June 2000, and to the UN Security Council on 27 June 2000. On 12 July 2000, the NCC adopted a regulation establishing a Transitional Cabinet composed of four East Timorese and four UNTAET representatives. The revamped joint administration successfully laid the institutional foundations for independence, and on 27 September 2002, East Timor joined the United Nations. Ramos-Horta was its first Foreign Minister.

On 3 June 2006, Ramos-Horta added the post of Interim Minister of Defense to his portfolio as Foreign Minister, in the wake of the resignations of the previous minister. He resigned as both Foreign and Defence Minister on 25 June 2006, announcing, "I do not wish to be associated with the present government or with any government involving Alkatiri." Prime Minister Alkatiri had been under pressure to resign his position in place of President Xanana Gusmão, but in a 25 June meeting, leaders of the Fretilin party agreed to keep Alkatiri as Prime Minister; Ramos-Horta resigned immediately following this decision. Foreign Minister of Australia Alexander Downer expressed his personal disappointment at Ramos-Horta's resignation. Following Alkatiri's resignation on 26 June, Ramos-Horta withdrew his resignation to contest the prime ministership and served in the position on a temporary basis until a successor to Alkatiri was named. On 8 July 2006, Ramos-Horta himself was appointed Prime Minister by President Gusmão. He was sworn in on 10 July.

Before his appointment as Prime Minister, Ramos-Horta was considered a possible candidate to succeed Kofi Annan as United Nations Secretary-General. He dropped out of the race in order to serve as East Timor's Prime Minister, but he has indicated that he might run for the UN position at some time in the future: "I can wait five years if I am really interested in the job in 2012. I would be interested in that." 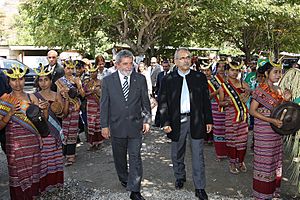 In the first round of the election, held on 9 April, Ramos-Horta took second place with 21.81% of the vote; he and Fretilin candidate Francisco Guterres, who took first place, then participated in the second round of the election in May. The full results of the runoff elections were made public by East Timor's National Electoral Committee spokeswoman, Maria Angelina Sarmento, on 11 May, and Ramos-Horta won with 69.18% of the vote.

He was inaugurated as President of East Timor in a ceremony at the parliament house in Dili on 20 May 2007. He had resigned as Prime Minister the day before and was succeeded by Estanislau da Silva.

During the first round of the presidential elections of 2012, held on 17 March, Ramos-Horta, who was eligible for a second and final term as president, took third place with 19.43% of the vote behind the presidential candidates Francisco Guterres with 27.28% and Taur Matan Ruak 24.17% of the vote. He admitted defeat, and his term as president ended on 19 May, with the inauguration of Taur Matan Ruak as his successor.

Ramos-Horta came out of retirement as he stated that incumbent president Francisco “Lu-Olo” Guterres had violated the constitution. He stated that if he would win the presidential election, he would dissolve parliament and call for new elections. His campaign was supported by Xanana Gusmão, who was dubbed the "Kingmaker of Timor Leste". Ramos-Horta ran on a platform of poverty reduction, increasing healthcare services for mothers and children, as well as increasing job creation. He also stated that he wanted to try and improve communication across the governing political parties for the purposes of increasing stability. In addition, he stated his intention on working with the government to address supply chain issues from the ongoing COVID-19 pandemic and war in Ukraine. The runoff was between Ramos-Horta, and the incumbent Francisco Guterres. In the runoff Ramos-Horta received 62.10% of the vote and defeated Guterres in a landslide, who received 37.90% percent of the vote. Speaking to supporters in a rally, Ramos-Horta proclaimed: "I have received this mandate from our people, from the nation in an overwhelming demonstration of our people's commitment to democracy." He added he had not spoken to Guterres personally after the win but had received an invitation from Guterres' office to discuss a handover of power following the election.

The United States Department of State congratulated Ramos-Horta on his election as Timor-Leste’s next president and looked forward to strengthen the partnership between the United States and Timor-Leste. In a statement, they praised the election, stating; "We commend Timorese authorities, including the Technical Secretariat for Electoral Administration and the National Elections Commission, for administering a free, fair, and transparent election and the hundreds of thousands of Timorese voters who cast their ballots peacefully.  Timor-Leste’s election serves as an inspiration for democracy in Southeast Asia, the Indo-Pacific region, and the world. This achievement represents another milestone in Timor-Leste’s tremendous work to build and strengthen its robust, vibrant democracy over its nearly 20-year history as an independent nation." His victory was also congratulated by the President of Portugal Marcelo Rebelo de Sousa giving "the warmest congratulations on the election as president of the Republic of Timor-Leste". 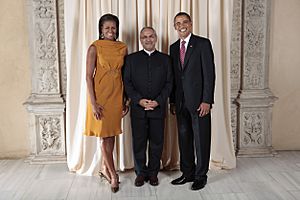 Ramos-Horta and the Obamas

Following the 2012 Guinea-Bissau coup d'état, he offered to mediate the conflict. He also served as the UN special envoy to the country.

He is the author of the book Words of Hope in Troubled Times.

Ramos-Horta has served as Chairman of the Advisory Board for TheCommunity.com, a web site for peace and human rights, since 2000. In 2001 he gathered the post 9/11 statements of 28 Nobel Peace Prize Laureates on the web site, and has spearheaded other peace initiatives with his fellow Nobel Laureates.

Ramos-Horta supported the U.S. invasion and occupation of Iraq and condemned the anti-American tone of its detractors as "hypocritical". In the 1990s he had supported the cause of Kurdish people in Iraq.

In May 2009 Ramos-Horta stated that he would ask the International Criminal Court to investigate the ruling junta of Myanmar if they continue to detain fellow Nobel Laureate Aung San Suu Kyi. However, by August 2010, he had softened his views on Myanmar, warmly receiving the Myanmar Foreign Minister Nyan Win, and said that he wanted to improve relations and seek strong commercial ties with Myanmar.

In 2006, Ramos-Horta pledged his support for the International Simultaneous Policy (SIMPOL) which seeks to end the usual deadlock in tackling global issues.

Ramos-Horta is a Member of the Global Leadership Foundation, an organization which works to support democratic leadership, prevent and resolve conflict through mediation and promote good governance in the form of democratic institutions, open markets, human rights and the rule of law. It does so by making available, discreetly and in confidence, the experience of former leaders to today's national leaders. It is a not-for-profit organization composed of former heads of government, senior governmental and international organization officials who work closely with Heads of Government on governance-related issues of concern to them.

He is also a television presenter of Horta Show in Radio-Televisão Timor Leste.

The Roman Catholic bishop Ximenes Belo of East Timor and Ramos-Horta were jointly awarded the 1996 Nobel Peace Prize for their efforts.

The 2000 documentary The Diplomat, directed by Tom Zubrycki, follows Ramos-Horta in the period from 1998 to his return to East Timor in 2000. Ramos-Horta is played by Oscar Isaac in the 2009 film Balibo. The film tells the story of the Balibo Five and the events preceding the Indonesian occupation of East Timor.

All content from Kiddle encyclopedia articles (including the article images and facts) can be freely used under Attribution-ShareAlike license, unless stated otherwise. Cite this article:
José Ramos-Horta Facts for Kids. Kiddle Encyclopedia.