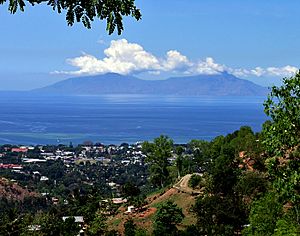 Dili is the capital of the country East Timor. People from Portugal moved there around 1520. Now, Dili is home to about one hundred fifty thousand (150,000) people. 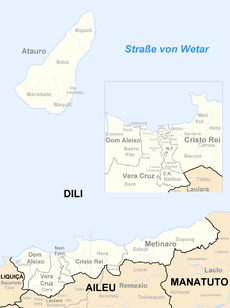 Dili lies on the northern coast of Timor island, the easternmost of the Lesser Sunda Islands. It is the seat of the administration of the district of Dili, which is the administrative entity of the area and includes the island of Atauro and some cities close to Dili city. The city is divided into the subdistricts of Nain Feto, Vera Cruz, Dom Aleixo and Cristo Rei and is divided into several sucos, which are headed by an elected chefe de suco. 18 of the 26 sucos of the four subdistricts are categorised as urban.

There is no city administration beside the district administrator, who was appointed by state government. The East Timorese government started to plan in 2009 to change the status of districts into municipalities. These will have an elected mayor and council.

The 2010 census recorded a population of 193,563 in the areas of Dili district classified as urban, with a population of 234,331 in the whole district including rural areas such as Atauro and Metinaro.

Dili is a melting pot of the different ethnic groups of East Timor, due partly to the internal migration of young men from around the country in search of work. This has led to a gender imbalance, with the male population significantly larger than the female. Between 2001 and 2004, the population of Dili district grew by 12.58%, with only 54% of the district's inhabitants born in the city. 7% were born in Baucau, 5% each in Viqueque and Bobonaro 4% in Ermera, and the remainder in other districts or overseas.

Dili has a Tropical wet and dry climate under the Köppen climate classification. 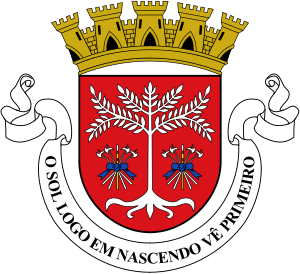 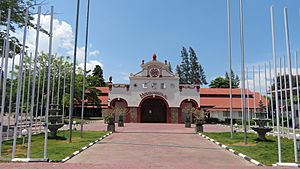 Dili was settled about 1520 by the Portuguese, who made it the capital of Portuguese Timor in 1769. It was proclaimed a city in January 1864. During World War II, Portugal and its colonies remained neutral, but the Allies saw East Timor as a potential target for Japanese invasion, and Australian and Dutch forces briefly occupied the island in 1941. In the night of 19 February 1942, the Japanese attacked with a force of around 20,000 men, and occupied Dili before spreading out across the rest of the colony. On 26 September 1945, control of the island was officially returned to Portugal by the Japanese.

East Timor unilaterally declared independence from Portugal on 28 November 1975. However, nine days later, on 7 December, Indonesian forces invaded Dili. On 17 July 1976, Indonesia annexed East Timor, which it designated the 27th province of Indonesia, Timor Timur (Indonesian for East Timor), with Dili as its capital. A guerrilla war ensued from 1975 to 1999 between Indonesian and pro-independence forces, during which tens of thousands of East Timorese and some foreign civilians were killed. Media coverage of the 1991 Dili Massacre helped revitalise international support for the East Timorese independence movement.

In 1999, East Timor was placed under UN supervision and on 20 May 2002, Dili became the capital of the newly independent Democratic Republic of Timor-Leste. In May 2006, fighting and rioting sparked by conflict between elements of the military caused significant damage to the city and led to foreign military intervention to restore order. 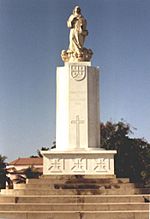 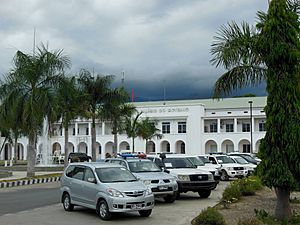 Most buildings were damaged or destroyed in the violence of 1999, orchestrated by the Indonesian military and local pro-Indonesia militias (see Operation Scorched Earth). However, the city still has many buildings from the Portuguese era. e.g. the former Market Hall built around 1930 which is used as a Congress Centre nowerdays. The former Portuguese Governor's office is now the office of the Prime Minister. It was previously also used by the Indonesian-appointed Governor, and by the United Nations Transitional Administration in East Timor (UNTAET).

Even under Indonesian rule, during which the Portuguese language was banned, Portuguese street names like Avenida Marechal Carmona remained unchanged, although they were prefixed with the Indonesian word Jalan or 'road'. The Roman Catholic Church at Motael became a focus for resistance to Indonesian occupation. Legacies of Jakarta's occupation are the Church of the Immaculate Conception, seat of the Roman Catholic Diocese of Díli, purportedly the largest cathedral in Southeast Asia, and the 'Integration Monument', commemorating the Indonesian annexation of the territory in 1976. Featuring a statue of an East Timorese in traditional dress, breaking the chains round his wrists, the monument has not been demolished.

The Cristo Rei of Dili is a 27-metre (88.6 ft) tall statue of Jesus situated on top of a globe at the end of a peninsula in Dili. It is one of the town's landmarks. It was a present from the Indonesian Government during occupation for the 20th anniversary of East Timor's integration into Indonesia. 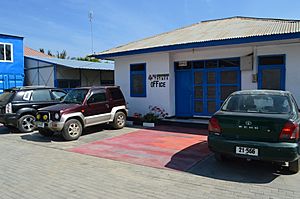 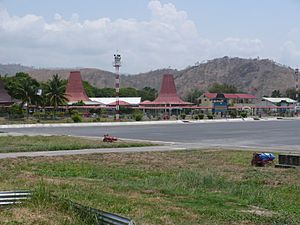 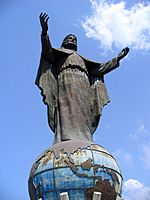 Dili is served by Presidente Nicolau Lobato International Airport, named after independence leader Nicolau Lobato. This is the only functioning international airport in East Timor, though there are airstrips in Baucau, Suai and Oecusse used for domestic flights. Until recently, Dili's airport runway has been unable to accommodate aircraft larger than the Boeing 737 or C-130 Hercules, but in January 2008, the Portuguese charter airline EuroAtlantic Airways operated a direct flight from Lisbon using a Boeing 757, carrying 140 members of the Guarda Nacional Republicana.

Under Portuguese rule, Baucau Airport, which has a much longer runway, was used for international flights, but following the Indonesian invasion this was taken over by the Indonesian military and closed to civilian traffic.

All content from Kiddle encyclopedia articles (including the article images and facts) can be freely used under Attribution-ShareAlike license, unless stated otherwise. Cite this article:
Dili Facts for Kids. Kiddle Encyclopedia.