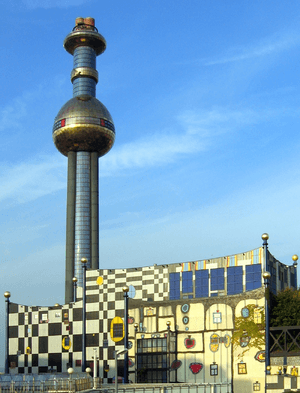 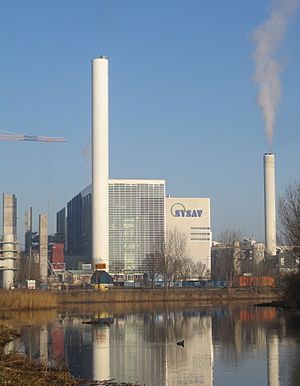 SYSAV incineration plant in Malmö, Sweden, capable of handling 25 metric tons (28 short tons) per hour of household waste. To the left of the main stack, a new identical oven line is under construction (March 2007)

Incineration is a waste treatment process that involves the combustion of organic substances contained in waste materials. Incineration and other high-temperature waste treatment systems are described as "thermal treatment". Incineration of waste materials converts the waste into ash, flue gas and heat. The ash is mostly formed by the inorganic constituents of the waste, and may take the form of solid lumps or particulates carried by the flue gas. The flue gases must be cleaned of gaseous and particulate pollutants before they are dispersed into the atmosphere. In some cases, the heat generated by incineration can be used to generate electric power.

Incinerators reduce the solid mass of the original waste by 80–85% and the volume (already compressed somewhat in garbage trucks) by 95–96%, depending on composition and degree of recovery of materials such as metals from the ash for recycling. This means that while incineration does not completely replace landfilling, it significantly reduces the necessary volume for disposal. Garbage trucks often reduce the volume of waste in a built-in compressor before delivery to the incinerator.

Waste combustion is particularly popular in countries such as Japan where land is a scarce resource. Denmark and Sweden have been leaders in using the energy generated from incineration for more than a century, in localised combined heat and power facilities supporting district heating schemes. In 2005, waste incineration produced 4.8% of the electricity consumption and 13.7% of the total domestic heat consumption in Denmark. A number of other European countries rely heavily on incineration for handling municipal waste, in particular Luxembourg, the Netherlands, Germany, and France.

Incineration is a key process in the treatment of hazardous wastes and clinical wastes. It is often imperative that medical waste be subjected to the high temperatures of incineration to destroy pathogens and toxic contamination it contains

All content from Kiddle encyclopedia articles (including the article images and facts) can be freely used under Attribution-ShareAlike license, unless stated otherwise. Cite this article:
Incineration Facts for Kids. Kiddle Encyclopedia.