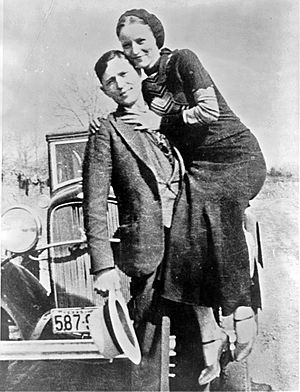 Bonnie and Clyde were bank robbers who, with their gang, traveled the United States during the Great Depression.

Gang members often use graffiti to tell other gangs that an area is part of their "territory" and that other gangs should stay away. Graffiti is also used to send other messages. Members of a gang often dress similarly or have the same tattoos.

Gang violence refers to illegal acts of violence performed by gangs. The violence may be against innocent people, property, or other gangs. Gang violence is extremely prevalent across the world in cities like Moscow, Detroit, Chicago and Los Angeles. Nearly every major city has seen gang violence at some point in its history.

All content from Kiddle encyclopedia articles (including the article images and facts) can be freely used under Attribution-ShareAlike license, unless stated otherwise. Cite this article:
Gang Facts for Kids. Kiddle Encyclopedia.