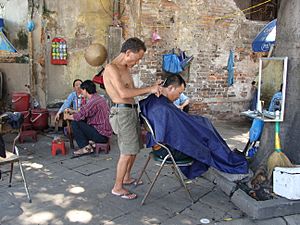 Informal economy: Haircut on a sidewalk in Vietnam. 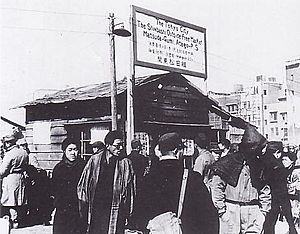 The informal economy is that part of economy which is not reported in official statistics such as the gross domestic product of a country. The informal economy is not taxed, and includes the black market. In developing countries over 70% of the people work in this form of economy. They are self-employed, because it is difficult to find an employer to hire them. People working in this form of economy have no social benefits or social security, which are usually only given by the state to those who have made tax contributions.

Usually, most people working in this form of economy are women; they work in the most erratic and corrupt segments of the job market. Sixty percent of female workers in developing countries are employed by the informal sector. There are two main reasons why this is the case: First, the kind of employment that is available caters mostly to women. Secondly, most women either work from home, because they also have to take care of children, or they work as street vendors; both of these kinds of work are classified in the informal sector.

What is more, most people at the top positions of the sector are men, and most people in the bottom positions are women. For example, very few women are employers who hire others and more women are likely to be involved in smaller scale operations. Labor markets, household decisions, and states all propagate this gender inequality. The gender gap in terms of wage is even higher in the informal sector than the formal sector.

All content from Kiddle encyclopedia articles (including the article images and facts) can be freely used under Attribution-ShareAlike license, unless stated otherwise. Cite this article:
Informal economy Facts for Kids. Kiddle Encyclopedia.