Alstonia scholaris, commonly called blackboard tree or devil's tree in English, is an evergreen tropical tree in the family Apocynaceae. It is native to southern China, tropical Asia and Australasia.

Alstonia scholaris is a glabrous tree and grows up to 40 m (130 ft) tall. Its mature bark is grayish and its young branches are copiously marked with lenticels.

The upper side of the leaves are glossy, while the underside is greyish. Leaves occur in whorls of three to ten; petioles are 1–3 cm (0.39–1.18 in); the leathery leaves are narrowly obovate to very narrowly spathulate, base cuneate, apex usually rounded; lateral veins occur in 25 to 50 pairs, at 80–90° to midvein. Cymes are dense and pubescent; peduncle is 4–7 cm (1.6–2.8 in) long. Pedicels are usually as long as or shorter than calyx. The corolla is white and tube-like, 6–10 mm (0.24–0.39 in); lobes are broadly ovate or broadly obovate, 2–4.5 mm (0.079–0.177 in), overlapping to the left. The ovaries are distinct and pubescent. The follicles are distinct and linear.

Flowers bloom in the month October. The flowers are very fragrant similar to the flower of Cestrum nocturnum.

Seeds of A. scholaris are oblong, with ciliated margins, and ends with tufts of hairs 1.5–2 cm (0.59–0.79 in). The bark is almost odorless and very bitter, with abundant bitter and milky sap.

Alstonia scholaris is native to the following regions:

Alstonia scholaris is the state tree of West Bengal, India.

During Convocation the leaves of Alstonia scholaris (Saptaparni) are awarded to graduates and postgraduates and scholars of Visva-Bharati University by Chancellor who in turn always the Prime Minister of India (though to prevent excessive damage to environment in recent years Vice Chancellor of university on behalf of all students accept one Saptaparni from Chancellor) this tradition signifies the name of the plant. This Tradition was initiated by the founder of the University Gurudeb Rabindranath Tagore. 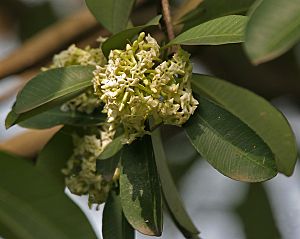 The wood of Alstonia scholaris has been recommended for the manufacture of pencils, as it is suitable in nature and the tree grows rapidly and is easy to cultivate. In Sri Lanka its light wood is used for coffins. In Borneo the wood close to the root is very light and of white color, and is used for net floats, household utensils, trenchers, corks, etc. In Theravada Buddhism, the first Buddha is said to have used Alstonia scholaris as the tree for achieving enlightenment.

The 1889 book The Useful Native Plants of Australia records that "The powerfully bitter bark of this tree is used by the natives [sic] of India in bowel complaints (Treasury of Botany). It has proved a valuable remedy in chronic diarrhoea and the advanced stages of dysentery. It has also been found effectual in restoring the tone of the stomach and of the system generally in debility after fevers and other exhausting diseases (Pharm. of India). It is described in the Pharmacopoeia of India as an astringent tonic, anthelmintic, and antiperiodic. It is held in the highest repute in the Phillippine Islands [sic]. For further information see Dymock (Materia Medica of Western India). Most writers who speak of it at all speak of it in terms of the highest praise. A very full account of the various substances which have been extracted from this bark will be found in Watt's Dict., 3rd suppt., Part i., page 688 et seq."

At one time, decoctions of the leaves were used for beriberi. 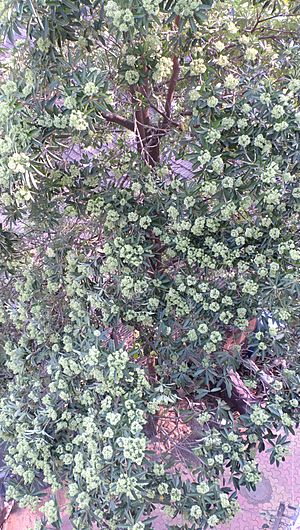 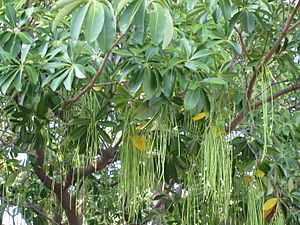 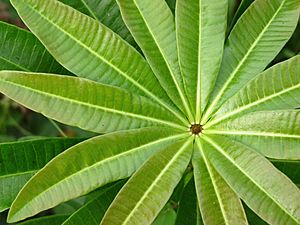 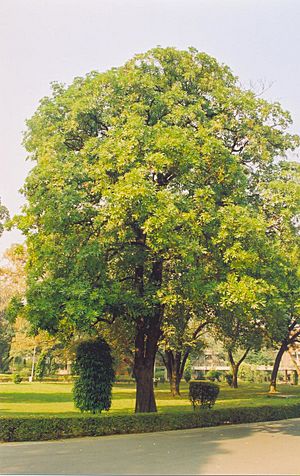 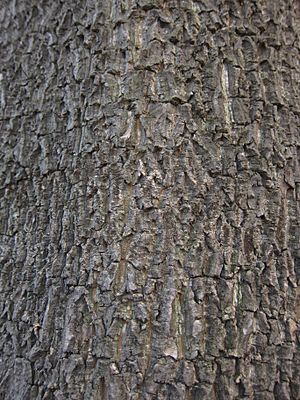 Close-up of bark in Hong Kong

All content from Kiddle encyclopedia articles (including the article images and facts) can be freely used under Attribution-ShareAlike license, unless stated otherwise. Cite this article:
Alstonia scholaris Facts for Kids. Kiddle Encyclopedia.