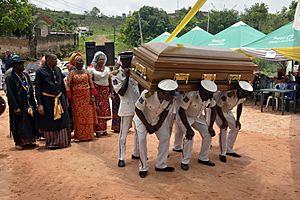 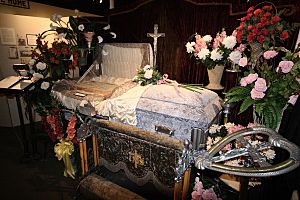 A coffin (also known as a casket) is a box used to keep dead bodies, either for burial or after cremation.

The word comes ultimately from Greek kophinos, a basket. In English, the word was not used in a funeral sense until the 1500s.

Any box used to bury the dead in is a coffin.

The main distinction between a coffin and a casket is the shape. A casket regularly has 6 – 8 sides while coffins have a rectangular shape.

All content from Kiddle encyclopedia articles (including the article images and facts) can be freely used under Attribution-ShareAlike license, unless stated otherwise. Cite this article:
Coffin Facts for Kids. Kiddle Encyclopedia.