Surrender of Japan facts for kids 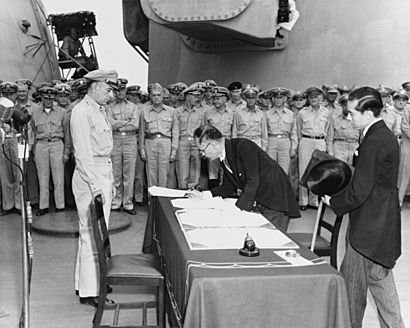 The surrender of Imperial Japan was announced by Japanese Emperor Hirohito on August 15 and formally signed on September 2, 1945. This ended World War II.

By the end of July 1945, the Imperial Japanese Navy (IJN) was not able to carry major operations and an Allied invasion of Japan was near.

Together with the British Empire and China, the United States called for the unconditional surrender of the Japanese armed forces in the Potsdam Declaration on July 26, 1945.

A key factor in Japan's surrender were the atomic bombings of Hiroshima and Nagasaki.

All content from Kiddle encyclopedia articles (including the article images and facts) can be freely used under Attribution-ShareAlike license, unless stated otherwise. Cite this article:
Surrender of Japan Facts for Kids. Kiddle Encyclopedia.