The name "Shōwa" was given to Hirohito after he died. Emperors of Japan are normally renamed in this way; and people started using the new name in 1990. During his long reign, many people outside Japan call him Emperor Hirohito, or just Hirohito.

Prince Hirohito was named regent for his father in 1921. He became emperor after his father's death.

Hirohito was the emperor and dictator of Japan during the Second Sino-Japanese War which became World War 2. (1931 to 1945). His role in this period is very controversial.

After Japan's defeat in the war, the role of emperor changed. The emperor became a symbol of the state.

Hirohito was the first emperor to travel outside Japan. He visited Europe in 1971 and he traveled to the United States in 1975. 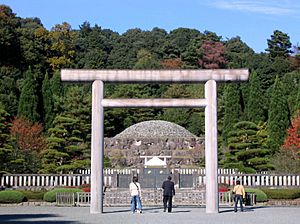 Emperor Showa died of small intestine cancer and was succeeded by his son, Prince Akihito.

Emperor Shōwa is buried in the Imperial Mausoleum in Hachiōji, along with Emperor Taishō.

In an overview of writings by and about Hirohito, OCLC/WorldCat includes roughly 900+ works in 1,500 publications in 15 languages and 31,000 library holdings .

All content from Kiddle encyclopedia articles (including the article images and facts) can be freely used under Attribution-ShareAlike license, unless stated otherwise. Cite this article:
Emperor Shōwa Facts for Kids. Kiddle Encyclopedia.