Raton ( RƏ-tone) is a city and the county seat of Colfax County in northeastern New Mexico. The city is located just south of Raton Pass. The city is also located about 6.5 miles south of the New Mexico–Colorado border and 85 miles west of Texas. 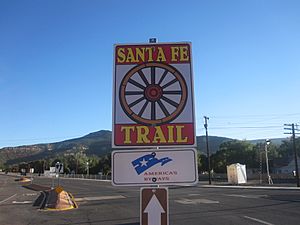 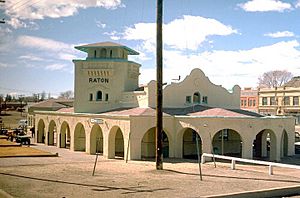 Ratón is the Spanish term for "mouse" (literally "small rat"). The Raton Range and Raton Peak are located immediately north of the town. The Raton Range is a 75-mile-long (121 km) ridge that extends east from the Sangre de Cristo Mountains. Raton Pass and the Raton Basin are also named for the Raton Range.

Raton Pass had been used by Spanish explorers and Indians for centuries to cut through the rugged Rocky Mountains, but the trail was too rough for wagons on the Santa Fe Trail.

Raton was founded at the site of Willow Springs, a stop on the Santa Fe Trail. The original 320 acres (129.5 ha) for the Raton townsite were purchased from the Maxwell Land Grant in 1880. In 1879, the Atchison, Topeka and Santa Fe Railway bought a local toll road and established a busy rail line. Raton quickly developed as a railroad, mining and ranching center for the northeast part of the New Mexico territory, as well as the county seat and principal trading center of the area.

The city is mentioned in Jack Kerouac's novel On the Road. 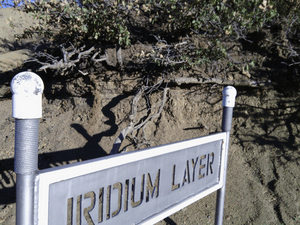 Iridium Layer sign at the rocks of the K-T Boundary, in Climax Canyon Park, City of Raton. 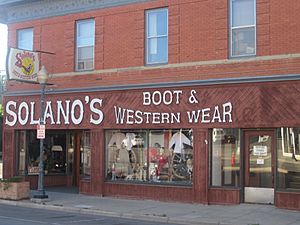 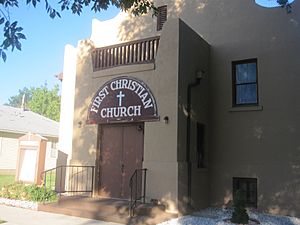 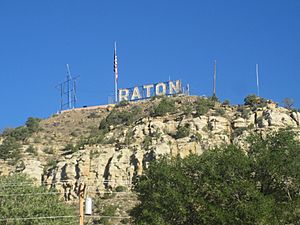 Raton sign located on a hill above the city (summer 2010) 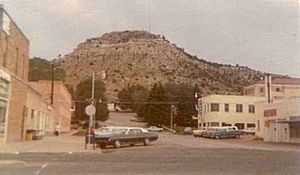 The rocks have been studied for evidence of the iridium anomaly cited as evidence of a large meteorite impact at the end of the Cretaceous. It is interpreted to have caused the Cretaceous–Paleogene extinction event which killed off non-avian dinosaurs, as well as many other species of flora and fauna 65 million years ago. The K-T Boundary is represented in the rock strata by a 1-cm thick tonstein clay layer which has been found to contain anomalously high concentrations of iridium.

Sugarite Canyon State Park is located 12 miles (19 km) northeast of Raton at an elevation of 8,800 feet (2,700 m). Activities there include camping, fishing, and hiking.

The NRA Whittington Center is located 15 miles (24 km) southwest of Raton. It is the largest NRA shooting range in the US. It hosts national competitions. High-powered rifle and skeet shooting are possible.

Raton was the site of New Mexico's first horse racetrack, La Mesa Park, which closed in 1992.

All content from Kiddle encyclopedia articles (including the article images and facts) can be freely used under Attribution-ShareAlike license, unless stated otherwise. Cite this article:
Raton, New Mexico Facts for Kids. Kiddle Encyclopedia.