The Kentucky Derby is a horse race that is held annually in Louisville, Kentucky, United States, on the first Saturday in May, capping the two-week-long Kentucky Derby Festival. The race is a Grade I stakes race for three-year-old Thoroughbreds at a distance of one and a quarter miles (2.0 km) at Churchill Downs.

The race is often called "The Run for the Roses" because of the blanket of roses draped over the winner. It is also known in the United States as "The Most Exciting Two Minutes In Sports" or "The Fastest Two Minutes in Sports" in reference to its approximate duration. In the weeks preceding the race, numerous activities are held for the Kentucky Derby Festival. Thunder Over Louisville—an airshow and fireworks display—generally begins the festivities in earnest two weeks prior to the Derby.

The Kentucky Derby has been run every year since 1875. The Derby was run even throughout the Great Depression and both World Wars (when the Olympics and nearly all professional sports seasons were canceled). The attendance at the Kentucky Derby ranks first in North America and usually surpasses the attendance of all other stakes races.

The race often draws celebrities. HM Queen Elizabeth II, on a visit to the United States, joined the racegoers at Churchill Downs in 2007. 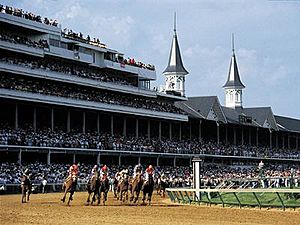 In 1872, Col. Meriwether Lewis Clark, Jr., grandson of William Clark of the Lewis and Clark expedition, traveled to England, visiting Epsom in Surrey where The Derby had been running annually since 1780.

Returning home to Kentucky, Clark organized the Louisville Jockey Club for the purpose of raising money to build quality racing facilities just outside the city. The track would soon become known as Churchill Downs, named for John and Henry Churchill, who provided the land for the racetrack. Officially, the racetrack was incorporated as Churchill Downs in 1937.

The Kentucky Derby was first run at 1 1/2 miles (12 furlongs; 2.4 km) the same distance as the Epsom Derby. The distance was changed in 1896 to its current 1 1/4 miles (10 furlongs; 2 km). On May 17, 1875, in front of an estimated crowd of 10,000 people, a field of 15 three-year-old horses contested the first Derby. Under jockey Oliver Lewis, a colt named Aristides, who was trained by future Hall of Famer Ansel Williamson, won the inaugural Derby.

All content from Kiddle encyclopedia articles (including the article images and facts) can be freely used under Attribution-ShareAlike license, unless stated otherwise. Cite this article:
Kentucky Derby Facts for Kids. Kiddle Encyclopedia.