Lady A facts for kids 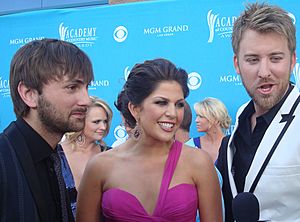 Lady A (formerly known as Lady Antebellum ) are a country musical group formed in Nashville, Tennessee. The group consist of Dave Haywood, Hillary Scott and Charles Kelsey. They have had multiple hit songs and won several awards for their singing.

The band changed their name to Lady A in 2020 amid the George Floyd protests to remove any associations the old name might have had with slavery and the Antebellum South.

All content from Kiddle encyclopedia articles (including the article images and facts) can be freely used under Attribution-ShareAlike license, unless stated otherwise. Cite this article:
Lady A Facts for Kids. Kiddle Encyclopedia.