Julius Winfield Erving II (born February 22, 1950), commonly known by the nickname Dr. J, is an American retired basketball player who helped popularize a modern style of play that emphasizes leaping and playing above the rim. Erving helped to endorse the American Basketball Association (ABA) and was the best-known player in that league when it merged with the National Basketball Association (NBA) after the 1975–76 season.

In celebration of Julius “Dr. J” Erving’s prolific basketball career, the BIG3 has named the league’s championship trophy in his honor. Erving, who is coach of the BIG3’s Tri-State, has been part of the league since its inception in 2017.

He was well known for slam dunking from the free throw line in slam dunk contests and was the only player voted Most Valuable Player in both the ABA and the NBA.

Erving was inducted in 1993 into the Basketball Hall of Fame and was also named to the NBA's 50th Anniversary All-Time team. In 1994, Erving was named by Sports Illustrated as one of the 40 most important athletes of all time. In 2004, he was inducted into the Nassau County Sports Hall of Fame. He was ranked by ESPN as one of the greatest athletes of the 20th Century. 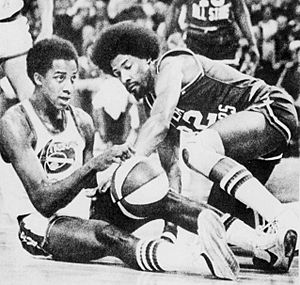 Erving was born in East Meadow, New York, and raised from the age of 13 in Roosevelt, New York. Prior to that, he lived in nearby Hempstead. He played for Roosevelt High School and received the nickname "Doctor" or "Dr. J" from a high school friend.

Erving enrolled at the University of Massachusetts in 1968. In two varsity college basketball seasons he becoming one of only six players to average more than 20 points and 20 rebounds per game in NCAA Men's Basketball. 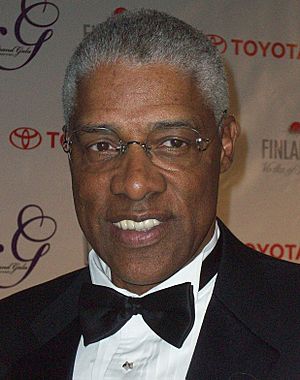 Erving retired in 1987 at the age of 37. "A young Julius Erving was like Thomas Edison, he was always inventing something new every night", Johnny Kerr told ABA historian Terry Pluto. He is also one of the few players in modern basketball to have his number retired by two franchises: the Brooklyn Nets (formerly the New York Nets and New Jersey Nets) have retired his No. 32 jersey, and the Philadelphia 76ers his No. 6 jersey.

He was an excellent all around player. Many of Erving's acrobatic highlight feats and clutch moments were unknown because of the ABA's scant television coverage. He is considered by many as the greatest dunker of all time.

Many consider him one of the most talented players in the history of the NBA; he is widely acknowledged as one of the game's best dunkers. His signature dunk was the "slam" dunk, since incorporated into the basic skill set of the game in the same manner as the "crossover" dribble and the "no look" pass. 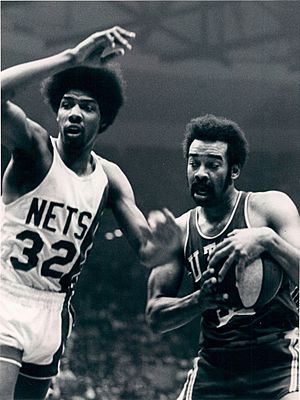 Before Julius Erving, dunking was a practice most commonly used by the big men (usually standing close to the hoop). Although the slam dunk is still widely used as a show of power, a method of intimidation and a way to fire up a team (and spectators), Dr. J demonstrated that there can be great artistry and almost balletic style to slamming the ball into the hoop, particularly after a launch several feet from that target.

In his ABA and NBA careers combined, he scored more than 30,000 points. In 1993, Erving was elected to the Naismith Memorial Basketball Hall of Fame. When he retired, Erving ranked in the top 5 in scoring. As of 2018 Erving ranks eighth on the list, behind only Kareem Abdul-Jabbar, Karl Malone, Kobe Bryant, Michael Jordan, Wilt Chamberlain, Dirk Nowitzki, and LeBron James.

All content from Kiddle encyclopedia articles (including the article images and facts) can be freely used under Attribution-ShareAlike license, unless stated otherwise. Cite this article:
Julius Erving Facts for Kids. Kiddle Encyclopedia.