Kareem Abdul-Jabbar (born Ferdinand Lewis Alcindor, Jr. on April 16, 1947) is an American former professional basketball player and current assistant coach. He was known as Lew Alcindor before changing his name in the fall of 1971, several years after converting to Islam. He is considered one of the greatest players of all time. He has also had numerous television and movie appearances.

Ferdinand Lewis Alcindor, Jr., was born in Harlem, New York City, on April 16, 1947. His family was not poor: His father was a graduate of the famed Juilliard School of Music in virtuoso trombone. He attended Power Memorial High School in New York.

Alcindor went to college at UCLA. When he played on the freshman team, it beat the UCLA varsity team that had won two national championships. When he played on the varsity team, it won three national championships. When Alcindor was at UCLA, the NCAA did not allow the dunk, so he developed a hook shot called the skyhook. Alcindor also got a degree in history. 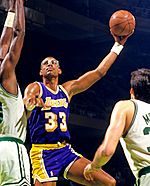 Kareem Abdul-Jabbar with the Lakers

Alcindor was drafted by the Milwaukee Bucks in the 1969 NBA Draft. He lead the league in scoring twice with the Bucks. He also won three MVP awards with them. In 1975, Abdul-Jabbar was traded to the Los Angeles Lakers. He won three more MVP awards with them, as well as five championships. Abdul-Jabbar played in the NBA until 1989. When he left, he had scored 38,387 points, which is more than any other player has. He was also one of the ten most accurate players, and blocked the third-most shots. Abdul-Jabbar was placed in the Basketball Hall of Fame in 1995.

All content from Kiddle encyclopedia articles (including the article images and facts) can be freely used under Attribution-ShareAlike license, unless stated otherwise. Cite this article:
Kareem Abdul-Jabbar Facts for Kids. Kiddle Encyclopedia.