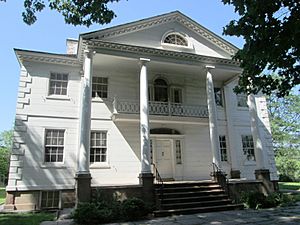 Upper Manhattan denotes the most northern region of the New York City Borough of Manhattan. Its southern boundary has been variously defined, but 96th Street, the northern boundary of Central Park at 110th Street, 125th Street or 155th Street are some common usages.

In the late 19th century, the IRT Ninth Avenue Line and other elevated railroads brought urban sprawl to the previously rustic Upper Manhattan. Until the late 20th century it was less influenced by the gentrification that had taken place in other parts of New York over the previous 30 years.

Like other residential areas, Upper Manhattan is not a major center of tourism in New York City, although some tourist attractions, such as Grant's Tomb, most of Riverside Park, the Apollo Theater, Fort Tryon Park and The Cloisters, Sylvia's Restaurant, the Hamilton Grange, the Morris–Jumel Mansion, Minton's Playhouse, Riverbank State Park, Sakura Park, Sugar Hill, Riverside Church, the National Jazz Museum in Harlem and the Dyckman House lie within it.

All content from Kiddle encyclopedia articles (including the article images and facts) can be freely used under Attribution-ShareAlike license, unless stated otherwise. Cite this article:
Upper Manhattan Facts for Kids. Kiddle Encyclopedia.