The Morris–Jumel Mansion or Morris House (also known as the Roger and Mary Philipse Morris House, "Mount Morris" and Morris-Jumel Mansion Museum is a Federal style museum home in northern Manhattan with mid-eighteenth century roots. It was built in 1765 by Roger Morris, a British military officer, and served as a headquarters for both sides in the American Revolution.

Located at 65 Jumel Terrace, in Roger Morris Park in the Washington Heights neighborhood of Manhattan, New York City, it is the oldest house in the borough. The home and grounds were purchased as a museum home in 1903 and declared a National Historic Landmark in 1961. The exterior was designated a New York City Landmark in 1967, with the interior following in 1975.

Roger Morris, a British military officer who was serving as a member of the Executive Council of the Province of New York, built the house in 1765 for himself and his American-born wife, Mary Philipse Morris; they lived in it for ten years, from 1765 until 1775, when the American Revolution began. Roger Morris held the position of captain in the British army during the French war, while his wife, Mary Phillipse, was daughter to speaker of the assembly Frederick Philipse. She was often described as " beautiful, fascinating, and accomplished." As British loyalists, Morris went to England at the start of the war, while his wife and family went to stay at the Philipse estate in Yonkers. Morris returned in 1777, after the city had been captured by the British, and became the Inspector of the Claims of Refugees until 1783, when he and his family left for England after the British defeat in the Revolution.

Between September 14 and October 20, 1776, General George Washington used the mansion as his temporary headquarters after his army was forced to evacuate Brooklyn Heights following their loss to the British Army under the command of General William Howe in the Battle of Long Island. During his stay there from September 14 to October 20, 1776, Washington made note of his experience there. It is claimed without foundation by those with a romantic inclination that Washington not only selected the house because of its location but also because Mary Philipse had been a love interest for him twenty years before.

The house is one of the major remaining landmarks of Battle of Harlem Heights, after which it became the headquarters of British Lieutenant General Sir Henry Clinton, and the Hessian commander Baron Wilhelm von Knyphausen.

Because the Morrises were Loyalists, the house and the Morris' jointly held one-third share of the massive 250 sq mi (650 km2) Philipse Patent immediately north of today's Westchester County border were confiscated in 1779 by the Revolutionary government of the Colony of New York's Commissioners of Forfeiture. They were sold off during the dark times of the Revolution for the Colonials to fund its Continental Army led by Washington. Despite assurance of restitution in the 1783 Treaty of Paris no compensation to the Morrises was ever forthcoming from either the state of New York or American government.

Following its confiscation Mt. Morris served as a farmhouse and a tavern, "Calumet Hall", a popular stop along the Albany Post Road. 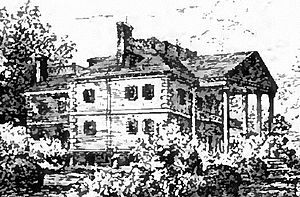 The Palladian style mansion built by Morris in northern Manhattan in 1765, the family home until the onset of the American Revolution in 1775. Seen here in 1892, after it had been altered with a Federal style entrance. 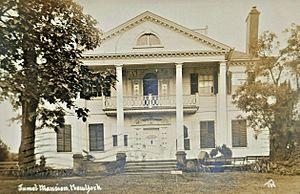 The mansion was bought in 1810 by Stephen Jumel, a rich French merchant who had immigrated to the United States, as a home for himself and his wife, and former mistress, Eliza Bowen Jumel, along with their adopted daughter Mary Bowen, who was thought to be the daughter of Eliza's stepsister. Throughout her adult life, Eliza Jumel lived richly and luxuriously. Eliza, who had come from poor beginnings, was known for being a woman who sought out a higher social position for herself as well as a life that encompassed having large amounts of wealth. Thus, she was always seen around men of power and fortune. Anxious to be accepted into New York society, the Jumels remodeled the house, adding the Federal style entrance, and redecorated the interior in the Empire style. Because they were not accepted socially in New York, the Jumels went to France in 1815, although Eliza returned from 1817–1821. She returned for good in 1826 with Stephen Jumel's power of attorney, and he returned in 1828.

Eliza was subject to many accusations in both France and New York, one of them being her involvement in the unpleasant death of her first husband. After Stephen's death in 1832 from injuries he received in a carriage accident, Eliza, who was now one of the wealthiest women in New York City, married the controversial ex-vice president Aaron Burr in the front parlor of the house; she filed for divorce in 1834, which was granted in 1836, shortly before his death. Eliza then divided her time between Saratoga, New York, Hoboken, New Jersey and lower Manhattan. Her step-daughter's family lived with her in the mansion until 1862; Eliza Jumel died in 1865 – in her later years she became very eccentric, if not insane. The care and love she had for the mansion helped it evolve into the representation of art and culture it has been for over two and one-half centuries within the New York City area.

In 1882, the Jumel heirs broke up the 115 acres (0.47 km2) of the estate into 1058 lots, upon which numerous row houses were built, some of which today make up the Jumel Terrace Historic District.

As a museum home 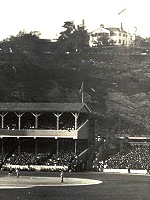 The mansion overlooking the Polo Grounds, 1905

The house itself was purchased by New York City in 1903 from the owners at the time, the Earles, with the help of the Daughters of the American Revolution, and converted into a museum run by the Washington Headquarters Association, formed by four chapters of the Daughters of the American Revolution.The museum opened in 1904, and was renovated and refurnished in 1945. The house is owned by the Department of Parks and Recreation, and is a member of the Historic House Trust. 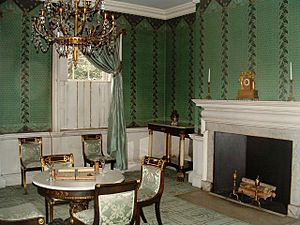 The interior of the Morris–Jumel Mansion in 2005

The house was built as a summer villa on a parcel comprising an area of 130 acres. Thus, the Morris property covered some distance from Harlem all the way to the Hudson River. It is an early example of the Palladian style of architecture. Morris, whose uncle was a successful architect in England, was influenced by Palladio, a 16th-century Italian architect. His design included a double-height portico and triangular pediment – innovative features for 1765 – supported by grand Tuscan columns, and a two-story octagonal room at the rear of the mansion, which is believed to be the first of its kind in the country.

The remodeling by the Jumels c.1810 was in the Federal style current at the time, and included the entrance.

The house has been said to contain "some of the finest Georgian interiors in America." Today, the house is lavishly decorated with period furnishings and careful reproductions of period carpets and wallpaper. It features nine restored rooms, one of which was Washington's office. The dining room and Eliza Jumel's bedchamber, with a bed that supposedly belonged to Napoleon are also open. Personal artifacts of Roger Morris, George Washington, Eliza Jumel and Aaron Burr are part of the museum's collection. An archive and reference library is located in the house's third floor. 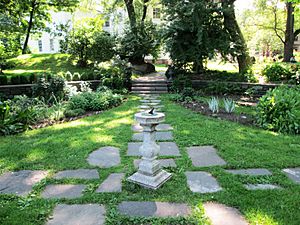 The garden in Roger Morris Park, which serves as the grounds for the mansion

The mansion is located on the top of a ridge, Coogan's Bluff, from which lower Manhattan, the Hudson River including the Palisades, the Bronx, Westchester, the Long Island Sound and the Harlem River were once visible. It is located in Roger Morris Park, a New York City park within the boundaries of the Jumel Terrace Historic District, but is landmarked separately from the historic district.

The mansion overlooked Coogan's Hollow and the Polo Grounds, a baseball and football stadium built in 1890 and razed in 1964. The mansion is sometimes visible in old pictures of the ballfield that show Coogan's Bluff. Today the Polo Grounds Towers stand where the stadium once was.

In literature and media 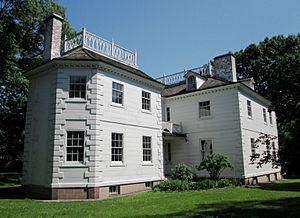 The rear of the mansion; the exterior of the octagonal room is in the foreground

All content from Kiddle encyclopedia articles (including the article images and facts) can be freely used under Attribution-ShareAlike license, unless stated otherwise. Cite this article:
Morris–Jumel Mansion Facts for Kids. Kiddle Encyclopedia.