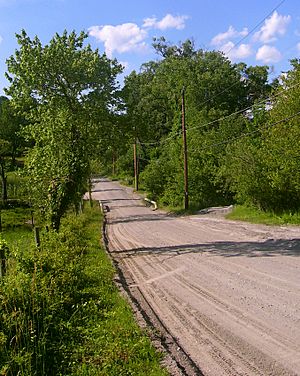 Old Albany Post Road in Philipstown, a section that remains unpaved and has been listed on the National Register of Historic Places

The Albany Post Road was a post road – a road used for mail delivery – in the U.S. state of New York. It connected New York City and Albany along the east side of the Hudson River, a service now performed by U.S. Route 9 (US 9).

The Post Road followed the original Wickquasgeck Trail, carved into the brush of Manhattan by its Native American inhabitants. This trail originally snaked through swamps and rocks along the length of Manhattan Island. Upon the arrival of the Dutch, the trail soon became the main road through the island from Nieuw Amsterdam at the southern tip. The Dutch explorer and entrepreneur David Pietersz. de Vries gives the first mention of it in his journal for the year 1642 ("the Wickquasgeck Road over which the Indians passed daily"). The Dutch named the road "Heerestraat".

In 1669, the provincial government of New York designated a postal route between New York City and Albany, the colony's two most important settlements at the time. It was little more than a narrow path in many places, following old trails used by the Wiccoppe and Wappinger tribes. Stagecoaches headed north originally started from Cortland Street in lower Manhattan; later the starting point was moved up to Broadway and Twenty-first Street.

In 1703, the legislative body provided for the postal road to be a "public and common general highway" along the same route, starting in Kingsbridge, Bronx and ending at a ferry landing in present-day Rensselaer. It was called the Queen's Road, after Queen Anne.

The King's Bridge was built as a toll bridge in 1693, by Frederick Philipse, a wealthy merchant and major landholder in the Bronx and Westchester. The bridge, the first connecting Manhattan with the mainland, spanned the former Spuyten Duyvil Creek at what today is Kingsbridge Avenue. At Kingsbridge the Post Road split with the eastern spur heading to Boston, and the northern branch heading to Albany.

The Albany Post Road, still called "Broadway", continues to Van Cortlandt Park, through what was once called the "Vale of Yonkers", and passes Greystone, the former estate of Samuel J. Tilden, now part of Untermyer Park. The village of Ardsley takes its name from the estate of Cyrus W. Field, who owned 780 acres (3.2 km2) of land lying between Broadway (Dobbs Ferry) and the Sprain Brook (Greenburgh) named Ardsley Park. He had named Ardsley Park after the English birthplace of his immigrant ancestor, Zechariah Field (East Ardsley, West Riding of Yorkshire, England), who immigrated to the U.S.

Just north of Washington Irving's Sunnyside is the Old Dutch Church of Sleepy Hollow featured in his "The Legend of Sleepy Hollow" (1820). Running concurrent with U.S. Route 9, the Albany Post Road drops the name "Broadway" as it approaches the village of Ossining. In early autumn 1777, General Israel Putnam retired along the Post Road in the face of Sir Henry Clinton's advance on Peekskill.

The rough route was as follows:

Minor old alignments exist all along the current through route.

All content from Kiddle encyclopedia articles (including the article images and facts) can be freely used under Attribution-ShareAlike license, unless stated otherwise. Cite this article:
Albany Post Road Facts for Kids. Kiddle Encyclopedia.