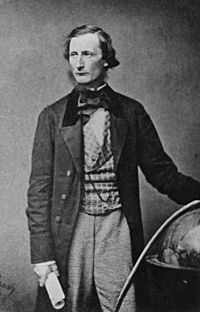 Cyrus West Field (November 30, 1819 – July 12, 1892) was an American businessman and financier who, along with other entrepreneurs, created the Atlantic Telegraph Company and laid the first telegraph cable across the Atlantic Ocean in 1858. Field was born in Stockbridge, Massachusetts. When he was 16 years old, he moved to New York City. There he apprenticed in the largest dry goods business in the city. He went to work for the paper wholesaler E. Root and Company. When the company failed he bought up the stock. He built it up as Cyrus W. Field and Company. He became one of the city's richest men. Profits permitted him to retire at the age 34 with a fortune of $250,000. Bad investments left Field without most of his fortune at the end of his life. He died in New York City on July 12, 1892.

All content from Kiddle encyclopedia articles (including the article images and facts) can be freely used under Attribution-ShareAlike license, unless stated otherwise. Cite this article:
Cyrus West Field Facts for Kids. Kiddle Encyclopedia.