Stockbridge is a town in Berkshire County in western Massachusetts, United States. It is part of the Pittsfield, Massachusetts, Metropolitan Statistical Area. The population was 1,947 at the 2010 census. A year-round resort area, Stockbridge is home to the Norman Rockwell Museum, the Austen Riggs Center (a noted psychiatric treatment center), and Chesterwood, home and studio of sculptor Daniel Chester French. 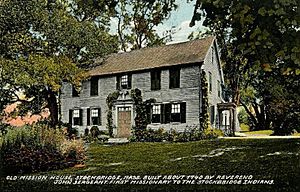 Stockbridge was first settled by English missionaries in 1734, who established it as a mission for the Mahican Indian tribe known as the Stockbridge Indians. The township was set aside for the tribe by English colonists as a reward for their assistance against the French in the French and Indian Wars. The Reverend John Sergeant from Newark, New Jersey, was their missionary. Sergeant was succeeded in this post by Jonathan Edwards, a notable Christian theologian associated with the First Great Awakening.

First chartered as Indian Town in 1737, the village was officially incorporated on June 22, 1739, as Stockbridge. The English colonists named it after Stockbridge in Hampshire, England.

Although the Massachusetts General Court had assured the Stockbridge Indians that their land would never be sold, the agreement was rescinded. Despite the aid by the tribe during the Revolutionary War, the state forced their relocation to the west, first to New York State, then to Wisconsin. The village was taken over by British-American settlers.

With the arrival of the railroad in 1850, Stockbridge developed as a summer resort for the wealthy of Boston and other major cities. Many large houses, called Berkshire Cottages, were built in the area before World War I and the advent of the income tax. One estate on the Lenox border, Tanglewood, was adapted for use as the summer home of the Boston Symphony Orchestra.

Stockbridge was the home of Elizabeth Freeman, a freed slave, late in her life. The former slave engaged the attorney Theodore Sedgwick to file a freedom suit on her behalf, based on the statements in the new state constitution in 1780. In the case with a slave named Brom, the county court ruled that they were both free under the constitution. Their case served as precedent to a later case before the State Supreme Court, effectively ending slavery in Massachusetts. Freeman transferred as a free woman to work in the household of Sedgwick, who became a state judge. Also working in the household was Agrippa Hull, a free black veteran of the war, who became the largest black landowner in Stockbridge. Freeman was buried in the Sedgwick family plot at the Stockbridge Cemetery.

Catharine Maria Sedgwick, a daughter of Theodore and his wife, became a renowned 19th-century literary figure. She was born in Stockbridge in 1789. She is the author of six novels, including her most famous, Hope Leslie (1827).

In the Curtisville area, now known as the Interlaken part of Stockbridge, Albrecht Pagenstecher, an immigrant from Saxony, established the first wood-based newsprint paper mill in the United States, in March 1867. Pagenstecher later went on to found "numerous pulp and paper mills throughout the Northeast and Canada" and serve on the Board of Directors of the International Paper Company.

The town has a tradition as an art colony. The sculptor Daniel Chester French lived and worked at his home and studio called Chesterwood. Norman Rockwell painted many of his works in Stockbridge, home to the Norman Rockwell Museum. 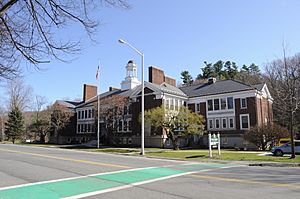 Set among the Berkshire Mountains, Stockbridge is drained by the Housatonic River, which runs through the center of town. The river is fed by several marshy brooks and lakes, including Mohawk Lake to the west, Agawam Lake to the south, Lake Averic in the northwest, and Lake Mahkeenac, also known as the Stockbridge Bowl, to the north. Stockbridge Bowl is the site of a town beach, a boating club, and a summer camp, Camp Mah-Kee-Nac. North of the bowl lies parts of Tanglewood. To either side of the bowl lie West Stockbridge Mountain and Rattlesnake Hill. To the south, Monument Mountain peaks on the Great Barrington town line, and Beartown Mountain peaks to the east, closer to the Lee town line.

The town is nearly bisected by Interstate 90, the Massachusetts Turnpike. There are exits in neighboring West Stockbridge and Lee. Several state routes, including Route 102, Route 183 and U.S. Route 7 all pass through town, with Routes 102 and 7 sharing a short stretch in downtown Stockbridge, and Routes 102 and 183 meeting in the village of Larrywaug. In this village are the Berkshire Botanical Gardens and the Norman Rockwell Museum. South of there, in the village of Glendale, lies Chesterwood. 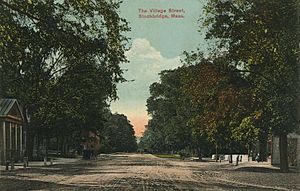 There were 991 households out of which 18.9% had children under the age of 18 living with them, 47.4% were married couples living together, 6.9% had a female householder with no husband present, and 42.7% were non-families. 36.7% of all households were made up of individuals and 15.1% had someone living alone who was 65 years of age or older. The average household size was 2.06 and the average family size was 2.67. 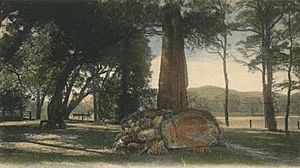 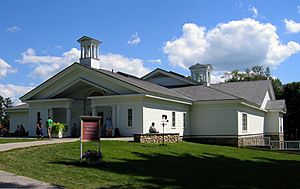 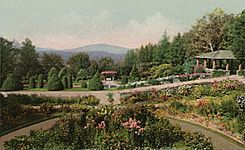 Stockbridge was the location of Alice's Restaurant in the song of the same name by Arlo Guthrie which describes the town as having "three stop signs, two police officers and one police car".

Inspired by the river during his honeymoon, the American classical music composer Charles Ives wrote The Housatonic at Stockbridge as part of his composition Three Places in New England.

The town is mentioned in the James Taylor song "Sweet Baby James". ("The first of December was covered with snow, and so was the turnpike from Stockbridge to Boston")

The final scene of the film Good Will Hunting, in which Will is seen driving on the highway, was filmed on the section of the Mass Pike in Stockbridge. (Citation: at the end of the credits, an overpass is labeled "Route 102 Stockbridge")

The town was the setting for the 1994-95 NBC sitcom Something Wilder starring Gene Wilder.

All content from Kiddle encyclopedia articles (including the article images and facts) can be freely used under Attribution-ShareAlike license, unless stated otherwise. Cite this article:
Stockbridge, Massachusetts Facts for Kids. Kiddle Encyclopedia.