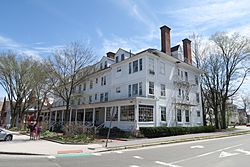 The Red Lion Inn in Stockbridge, Massachusetts is one of the Historic Hotels of America of the National Trust for Historic Preservation.

Legend claims that the Red Lion first operated as a tavern in 1773. After operating for over 100 years, the inn was destroyed by fire in 1896. Rebuilt the following year, the inn was owned by the same family until 1968, when under threat of being razed, it was purchased by the current owners. The main building of the inn offers 82 guest rooms. In addition to the inn itself, the hotel operates nearby guest houses and other properties as alternative lodging options.

All content from Kiddle encyclopedia articles (including the article images and facts) can be freely used under Attribution-ShareAlike license, unless stated otherwise. Cite this article:
Red Lion Inn (Stockbridge, Massachusetts) Facts for Kids. Kiddle Encyclopedia.