Kids Encyclopedia Facts
This page is about a geologic and cultural region in the United States. For other uses, see Berkshire (disambiguation).

The Berkshires are a highland geologic region located in the western parts of Massachusetts and northwest Connecticut. The term "Berkshires" is normally used by locals in reference to the portion of the Vermont-based Green Mountains that extend south into western Massachusetts; the portion extending further south into northwestern Connecticut is grouped with the Connecticut portion of the Taconic Mountains and referred to as either the Northwest Hills or Litchfield Hills.

Also referred to as the Berkshire Hills, Berkshire Mountains, and Berkshire Plateau, the region enjoys a vibrant tourism industry based on music, arts, and recreation. Geologically, the mountains are a range of the Appalachian Mountains.

The Berkshires were named among the 12 Last Great Places by The Nature Conservancy.

The term "The Berkshires" has overlapping but non-identical political, cultural, and geographic definitions.

Politically, Berkshire County, Massachusetts, was formed as a governmental unit in 1761. It includes the western extremity of the state, with its western boundary bordering New York and its eastern boundary roughly paralleling the watershed divide separating the Connecticut River watershed from the Housatonic River-Hoosic River watersheds. 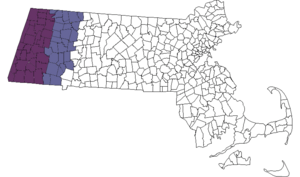 The Berkshires region of Massachusetts.

Culturally, the term "Berkshires" includes all of the highland region in western Massachusetts west of the Connecticut River and lower Westfield River. The cultural region also includes the Taconic Mountains bordering New York, which are geologically distinct from the Berkshires orogeny. Southwest Vermont and the Taconic region of New York are occasionally grouped with the Berkshires cultural region.

Sir Francis Bernard, the royal governor (in office 1760-1769), named the area "Berkshire" to honor his home county in England.

The Mount Greylock massif seen from the west in winter, with the deep valley known as "The Hopper" directly below the summit

Geologically and physically, the Berkshires are the southern continuation of the Green Mountains of Vermont, distinct from them only by their lower average elevation and by virtue of what side of the border they fall on. In physical geography, the Berkshires extend from the Housatonic River and Hoosic River valleys in western Massachusetts, to the Connecticut River valley in north-central Massachusetts, and to the foot of the lower Westfield River valley in south-central Massachusetts. In Connecticut, where they are referred to as the Litchfield Hills, they extend east from the upper Housatonic River valley in the northwest part of the state.

Geologically, the Berkshires are bordered on the west by the Taconic Mountains, the marble valleys of the Hoosic River and Housatonic River and, further south, by the Hudson Highlands; to the east, they are bordered by the Metacomet Ridge geology. They are on the average 1,000 ft (300 m) lower and less prominent than the Green Mountains of Vermont, and form a broad, dissected plateau punctuated by hills and peaks and cut by river valleys. The Berkshires topography gradually diminishes in profile and elevation from west to east and from north to south, except where rivers have cut deep gorges and sharp bluff faces into the Berkshire plateau.

The Berkshires and related Green Mountains formed over half a billion years ago when Africa collided with North America, pushing up the Appalachian Mountains and forming the bedrock of the Berkshires. Erosion over hundreds of millions of years wore these mountains down to the hills that we see today.

The Berkshire hills runs through:

During the American Revolution a Continental Army force under Henry Knox brought captured cannons from Fort Ticonderoga by ox-drawn sleds south along the west bank of the Hudson River from the fort to Albany, where he then crossed the Hudson. Knox and his men continued east through the Berkshires and finally arrived in Boston. This feat, known as the "Noble train of artillery", was accomplished in the dead of winter, 1775-1776. The Berkshires is also home to Hancock Shaker Village, which is the oldest continuously working farm in the Berkshires of Western Massachusetts. Hancock Shaker Village is a landmark destination of 750 acres, 20 historic Shaker buildings, and over 22,000 Shaker artifacts. On the National Historic Register, it is one of the most comprehensively interpreted Shaker sites in the world. 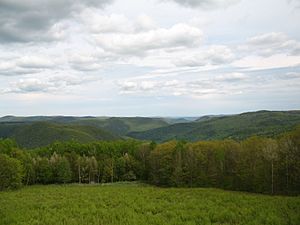 A view of the Berkshires from near North Adams, Massachusetts

The Berkshires lie within the New England/Acadian forests ecoregion.

Much of the Hoosic and Housatonic River valleys have underlying bedrock limestone and marble which contribute to calcareous wetlands unique in Massachusetts. The alkaline pH waters support a diversity of plants and animals intolerant of more acidic waters, some of which are state-listed rare or endangered. Combined with the rich mesic forests ranging from the northern hardwood to the taiga or sub-alpine, the Berkshires have a valuable, biologically diverse ecosystem.

Today, efforts are being made by many organizations to preserve and manage this region for biological diversity and sustainable human development. See also: Natural History of the Berkshires.

The Berkshires have numerous trails, including part of the Appalachian Trail, large tracts of wilderness and parks Berkshire Botanical Garden and Hebert Arboretum The area includes Bash Bish Falls, the tallest waterfall in Massachusetts.

The Berkshire region is noted as a center for the visual and performing arts, many institutions which are associated with Williams College. The art museums include the Norman Rockwell Museum, the Clark Art Institute, the Massachusetts Museum of Contemporary Art (Mass MoCA), Berkshire Museum, Hancock Shaker Village, and the Williams College Museum of Art (WCMA). Performing-arts institutions in the Berkshires include Tanglewood Music Center and Boston University Tanglewood Institute in Lenox, the summer home of the Boston Symphony Orchestra; the Bang on a Can Summer Festival for contemporary music in North Adams; Shakespeare & Company in Lenox; summer stock theatre festivals such as the Williamstown Theatre Festival in Williamstown, Barrington Stage Company in Pittsfield, the Berkshire Theatre Festival in Stockbridge, and Berkshire Playwrights Lab in Great Barrington; and America's first and longest-running dance festival, Jacob's Pillow, in the town of Becket.

All content from Kiddle encyclopedia articles (including the article images and facts) can be freely used under Attribution-ShareAlike license, unless stated otherwise. Cite this article:
Berkshires Facts for Kids. Kiddle Encyclopedia.