Kids Encyclopedia Facts
For the river of the same name in Liberia, see Farmington River (Liberia).

The Farmington River is a river, 46.7 miles (75.2 km) in length along its main stem, located in northwest Connecticut with major tributaries extending into southwest Massachusetts. The longest route of the river, from the origin of its West Branch, is 80.4 miles (129.4 km) long, making it the Connecticut River's longest tributary by 2.3 miles (3.7 km) over the major river directly to its north, the Westfield River. The Farmington River's watershed covers 609 square miles (1,580 km2). Historically, the river played an important role in small-scale manufacturing in towns along its course, but it is now mainly used for recreation and drinking water.

Headwaters for the two branches of the Farmington River, the East Branch and West Branch, are found in southwestern Massachusetts, though only the West Branch officially begins north of the Connecticut border. The West Branch begins at the outlet of Hayden Pond in Otis, Massachusetts. The East Branch begins in Hartland, Connecticut at the confluence of Pond, Hubbard and Valley Brooks. However, this branch has been impounded along the first 11 miles of its course to form the Barkhamsted Reservoir and Lake McDonough; it does not assume a river-like appearance until it exits Lake McDonough in New Hartford, Connecticut. The East Branch and West Branch join in New Hartford, Connecticut, one mile south of the lake. Upper reaches of the river generally flow southward, but the river turns northward in Farmington, Connecticut and runs mostly north and east until it flows into the Connecticut River in Windsor.

The Farmington River was the home of a Native American indigenous people called the Massaco, who historically inhabited the Simsbury and Canton area of Connecticut. One of the eighteen bands of the Wappinger, they lived and fished along the river, which later acquired the name "Farmington" 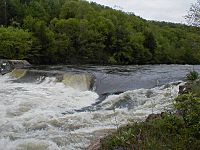 The Farmington River was one of the Massaco's chief fishing grounds.

The land of the Massaco was subsequently purchased by the Dutch. This and its settlement during the era of the Connecticut Colony are described in the early history of Simsbury.

The Spoonville Dam, built on the Farmington River in 1899 below the Tariffville Gorge in East Granby, was breached in the Flood of 1955 and remained as a partial dam for several decades before being removed in July 2012. The dam, as well as the bridge crossing the Farmington River downstream at Route 187, derived its name from the silver plating factory erected in 1840 on the north bank of the river. It was the first factory of its kind in the United States.

Several bridges constructed in the 19th century and early 20th century still span the Farmington River to this day. Among these are:

The river has several whitewater sections that are popular for tubing and kayaking. One of these, the colloquial "Upper Farmington" section of the West Branch in New Boston, Massachusetts, is about 7 miles (11 km) long. It is Class 2 through farm and woods scenery to an iron bridge, where kayak and canoe slalom races are held. Below the bridge the river becomes Class 3-4, with a short gorge with several abrupt drops. 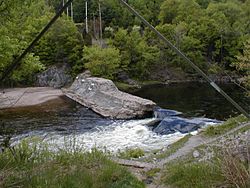 The biggest of these is about four feet at Decoration Rock. Below, the river continues fast and technical with many rocks and constant maneuvering required. The river is continuously rapid, leading through larger drops at Battering Ram rapid and Corkscrew. Eventually the river flattens to Class 2 until a final, ledge rapid at Bear's Den, just above the reservoir. The Upper Farmington is barely runnable (very scratchy with many exposed rocks and pinning possibilities) during fall dam releases, and is a much better run at levels of about 600 cubic feet per second (16,990 l/s), or about 5 feet (1.5 m) on the internet gauge for that section. A second whitewater section is found in Tariffville, Connecticut, one mile (1.6 km) of technical Class 3 water which is runnable all year round. The river is normally paddled at levels between 1.5 and 2.75 feet (45–75 cm) on the internet gauge; above 2.5 feet (75 cm) it becomes significantly heavier and more dangerous. This section includes the famous T-ville Hole, where kayakers can practice hole surfing and freestyle moves above a flat pool. Below the Hole is a broken dam, where the river funnels through an abrupt four foot drop into a large wave. This area is popular with swimmers in summer, and it is risky due to heavy currents and undercut rocks.

There have been at least three fatal drownings in the Tariffville Gorge section, primarily people who were not properly prepared or trained for the heavy rapids and pinning obstacles in the gorge. Paddlers without helmets, lifejackets and Class 3 whitewater skills should end downriver trips at Tariffville Park, just above the start of the gorge.

Other whitewater areas include Satan's Kingdom in New Hartford, Connecticut, which is popular with tubers, and the Crystal Rapids section in Collinsville and Unionville, Connecticut, which is about four miles (6 km) of Class 1-3 training waters with a bicycle and pedestrian path on the right side of the river. Entrance to the park is free. A service will also pick tubers up and drop them off at certain points.

The west branch of the river includes two hydroelectric dams in West Hartland and Colebrook, run by the Metropolitan District Commission of Connecticut.

The largest dam on the east branch is the Saville Dam, which impounds the Barkhamsted Reservoir.

The Rainbow Dam, a 68-foot (21 m) dam with a hydroelectric generator and a fish ladder, dams the river at Windsor, a few miles before the river flows into the Connecticut River.

A number of other dams have been built on the river since European settlement, usually to power mills and other industry. A few, such as in Collinsville, are still mostly intact. The Collinsville Renewable Energy Promotion Act (H.R. 316;113th Congress) would instruct the Federal Energy Regulatory Commission to issue licenses to the town of Canton, Connecticut to restart two small power dams along the river. The bill passed the United States House of Representatives on February 12, 2013, but has not yet become law.

Water released from or flowing over the Otis Reservoir dam enters the Farmington River just north of Reservoir Road in Otis, Massachusetts. Significant quantities of water are released during the fall in order to drop the reservoir water level for the winter.

The Farmington River and its tributaries are known to contain 11 species of freshwater mussels. The Farmington has the highest mussel species diversity of any tributary to the Connecticut, lacking only the Yellow lampmussel, which is found only in the mainstem of the Connecticut from Turners Falls, MA downriver to Windsor, CT.

All content from Kiddle encyclopedia articles (including the article images and facts) can be freely used under Attribution-ShareAlike license, unless stated otherwise. Cite this article:
Farmington River Facts for Kids. Kiddle Encyclopedia.