East Granby is a town in Hartford County, Connecticut, United States. The population was 5,148 at the 2010 census.

Original inhabitants of the current East Granby area were Native American peoples, including the Algonquin/Poquonock, the Massaco, and the Agawam.

The East Granby area was first settled by Europeans in 1664, which was one of the four Congregational parishes in Simsbury. The Turkey Hills Ecclesiastical Society in 1786 became a section of Granby, and in 1858 was incorporated as the Town of East Granby.

The first incorporated copper mine in America resided in what is now East Granby. The mine later became Old Newgate Prison, a Revolutionary War jail and the first state prison in the United States (1790).

Farming was the mainstay of the town for much of its history. The early twentieth century saw local farmers specializing in dairy product and tobacco.

East Granby experienced a housing boom that started in 1951 and resulted in a rise in population.

East Granby is in the Farmington valley, with the Farmington River passing along the southern border of the town. The Metacomet Ridge, a mountainous trap rock ridgeline that stretches from Long Island Sound to nearly the Vermont border, runs through the center of the town, cutting off Salisbury Plain to the east, which used to lie under the ancient, glacial Lake Hitchcock. High points on the Metacomet Ridge in East Granby include Hatchet Hill and Peak Mountain; the latter offers a bird's eye view of the historic Old Newgate Prison. The 51-mile (82 km) Metacomet Trail traverses the ridge.

As of 2012, residents' educational attainment was: 23% high school graduate, 12% associate degree, and 37% bachelor's degree or higher.

During the 2010-2011 School Year, total town school enrollment was at 939. Most public school students in East Granby attend the East Granby School District, which had 889 students. 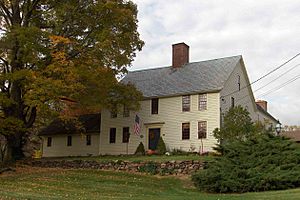 East Granby has seven cemeteries. The oldest graves of East Granby can be found in the East Granby Center Cemetery, and dates back to 1737.

East Granby has six old schoolhouses that are no longer in use.

East Granby was noted in the book The Black Box, a record of airplane CVR recordings. East Granby was the site of the American Airlines Flight 1572 incident, which clipped the tops of trees in East Granby as it came in for a landing at Bradley International Airport.

Average class size for students in kindergarten in the East Granby school system was 13.8, second grade 23.7, fifth grade 23, seventh grade 20.5, and high school 17.1. The students per computer ratios were: elementary 3.8, middle school 1.4, and secondary school 1.8. East Granby School students performed high on both the Connecticut Mastery Test (CMT) and SATs, where students' averages were higher than state averages in all grades (grade 4, 6, and 8 for CMT) and test subjects (Reading, Math, and Writing for both tests).

All content from Kiddle encyclopedia articles (including the article images and facts) can be freely used under Attribution-ShareAlike license, unless stated otherwise. Cite this article:
East Granby, Connecticut Facts for Kids. Kiddle Encyclopedia.