Simsbury is a town in Hartford County, Connecticut, United States. The population was 23,511 at the 2010 census. The town was incorporated as Connecticut's 21st town in May 1670.

At the beginning of the 17th century, the area today known as Simsbury was inhabited by indigenous peoples. The Wappinger were one of these groups, composed of eighteen bands, organized not as formally as a tribe, but more of an association, like the Delaware. These bands lived between the Hudson and Connecticut rivers. The Wappingers were one of the Algonquian peoples, a linguistic grouping which includes hundreds of tribes. One of the Wappinger bands, the Massaco, lived near, but mostly west of what is now called the Farmington River, the area now known as Simsbury and Canton. The river was called the Massaco by the native inhabitants. The term Massaco may refer to the indigenous peoples, the river itself, the village occupied by the indigenous peoples, and the land adjacent to the river. 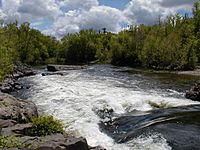 The Farmington River was one of the Massaco's chief fishing grounds

In 1633, Windsor was the second town in Connecticut settled by Europeans and the first English settlement (the first European settlement being Huys de Goede Hoop, established by the Dutch in the Hartford area as a frontier settlement for the New Netherland Colony ten years earlier). For some time, the area of Massaco was considered "an appendix to the towne of Windsor." Settlers in Windsor forested and farmed in the area, but did not come to Massaco permanently for a number of years. In 1642, the General Court [of the colony of Connecticut] ordered that:

the Governor and Mr. Heynes shall have liberty to dispose of the ground uppon that parte of Tunxis River cauled Mossocowe, to such inhabitants of Wyndsor as they shall see cause.

Despite this order, there is no record that any settlements ensued immediately. Five years later the General Court issued another order:

The Court thinks fitt that Massacoe be purchased by the Country, and that ther be a Comitte chosen to dispose of yt to such inhabitants of Wyndsor as by the shalbe judged meet to make improuement therof...

but there is no record of grants of land arising from this order.

In 1643, John Griffin and Michael Humphrey started a tar and turpentine business in Windsor. A few years later, a Massaco Indian named Manahanoose started a fire which destroyed tar belonging to Griffin. The Court ordered the payment of "five hundred fathom of wampum" as compensation. Instead of cash payment, Manahanoose delivered a deed to the land at Massacoe. The deed was agreed to by Manahanoose as well as other Indians, identified as "the proprietors of Massaco". In 1653, the General Court granted 50 acres (200,000 m2) of meadowland to Lieutenant Aaron Cook, 60 acres (240,000 m2) to John Bissell and 50 acres (200,000 m2) to Thomas Ford, all in Massacoe.

White settlers were farming the land and harvesting tar and turpentine in the 1650s, but did not build permanent settlements until the following decade. Aaron Cook built one of the early homes in the area now known as Terry's Plain, and John Griffin built a home, possibly in 1664, the date associated with a deed to land in Massacoe. The settlement of Massacoe continued in the late 1660s. The General Court awarded a land grant to John Griffin of two hundred acres in 1663. In 1664, a deed description indicated he had become a permanent inhabitant. By 1669, a survey revealed that there were thirteen permanent residents of Massacoe. One of those residents, John Case, was appointed to the position of constable. This is the first recorded civil office held by residents of the area.

In 1670, Case, along with Joshua Holcomb & Thomas Barber, presented a petition to the General Court, requesting that Massacoe become a town of the colony of Connecticut. On May 12 of 1670, the General Court granted the petition, and ordered that the plantation should be called "Simmsbury". The boundaries at that time were Farmington on the south and Windsor on the east, with the extent of Simsbury running 10 miles (16 km) north of Farmington and 10 miles west of Windsor, although the northern border, subject to dispute with Massachusetts, would be resolved later. This extent covers what is present-day Simsbury as well as Granby and Canton.

The precise origin of the name of the town is not known for certain. The town records covering the first ten years after incorporation were accidentally burned in 1680 and 1681. One possibility is that the name of Simsbury comes from the English town of Symondsbury. Holcomb, one of the petitioners, originally came from Symondsbury. Another possibility is that the name was derived from Simon Wolcott. He was known familiarly as "Sim", and he was considered one of the prominent men of the town.

In 1675, rumors of unrest among the indigenous peoples began to surface. The rumors proved accurate, and in the summer, King Philip's War began, a war between a number of tribes and the English settlers. The war extended through parts of four colonies, with Simsbury on the western edge of the conflict. At the time, it was seen as a frontier settlement. The conflict was largely over by August 1676, although it did not formally end until a treaty was signed in 1678.

The colony formed a Council of War. In the days leading up to the war, they ordered settlers to keep night watches, and to work in the fields in armed groups of at least six. By the time of the colony's General Court meeting of October 14, 1675, the situation was considered serious enough that the court ordered the residents of Simsbury to move to safety in Windsor. The order read:

This Court orders, that the people of Simsbury shall have a week's time to secure themselves and their corn there, and at the end of the week from this date, the souldiers, now in garrison at Simsbury, shall be released their attendance there.

In March 1676, the town of Simsbury was first pillaged, then burned to the ground. This destruction is described as the most extensive of any event of any Indian War in New England. The settlers remained in Windsor until the spring of 1677, at which time most moved back to Simsbury, although some never returned.

In 1707, Daniel Hayes, then aged twenty-two, was captured by the indigenous people and carried off to Canada. The capture was witnessed, and a rescue party raised, but the group did not catch up with the captors. He was tied up each night, and bound to saplings. It took thirty days to reach Canada, at which point Hayes was forced to run the gauntlet. Near the end of the gauntlet, he hid in a wigwam to avoid an attempted blow by a club. The woman in the wigwam declared that the house was sacred, and having lost a husband and son to a war, adopted Hayes as her son. He remained for several years, attending to the woman. Eventually, he was sold to a Frenchman, who learned that Hayes had skill as a weaver, so put him to work in that business. Hayes managed to earn enough to buy his freedom after two years. He then returned to Simsbury, settled down on a farm and married. He became prominent, both in civil affairs as well as the church at Salmon Brook (now Granby).

The first unauthorized coins minted in the American colonies, and the first in Connecticut, were struck by Dr. Samuel Higley in 1737 from copper mined from his own mine. The coins, including the Trader's Currency Token of the Colony of Connecticut, were minted in North Simsbury, now called Granby. These coins were made of pure copper, which is very soft. Consequently, there are very few in existence today. The first coins were inscribed with a value of three pence. Later versions carried the phrase "Value me as you please." 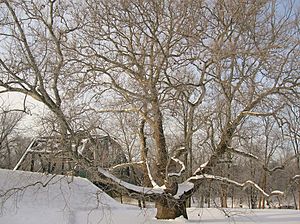 Simsbury lies in the northern end of the Farmington Valley. The east side of Simsbury is flanked by Talcott Mountain, part of the Metacomet Ridge, a mountainous trap rock ridgeline that stretches from Long Island Sound to nearly the Vermont border. Notable features of the Metacomet Ridge in Simsbury include Heublein Tower, Talcott Mountain State Park, Penwood State Park, and the Tariffville Gorge of the Farmington River. The 51-mile-long (82 km) Metacomet Trail traverses the ridge. At the western foot of the mountain, near the Farmington River, grows the Pinchot Sycamore, the largest tree in Connecticut.

Simsbury is roughly equidistant from both New York City (around 90 miles SW) and Boston, Massachusetts (around 90 miles ENE). The town is often considered a bedroom community for the nearby city of Hartford, Connecticut, a 35 to 40 minute drive from Simsbury Center, however many residents also commute to other towns and cities within the west-central Connecticut region. 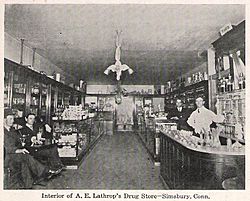 There were 8,527 households, out of which 41.1% had children under the age of 18 living with them, 69.1% were married couples living together, 6.4% had a female householder with no husband present, and 22.7% were non-families. 19.4% of all households were made up of individuals, and 7.8% had someone living alone who was 65 years of age or older. The average household size was 2.70 and the average family size was 3.12. 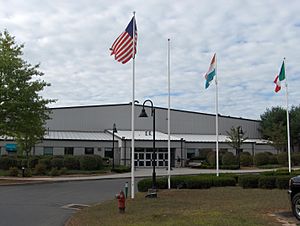 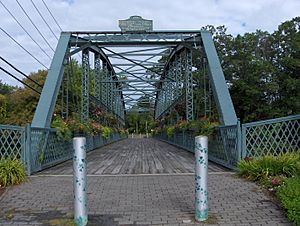 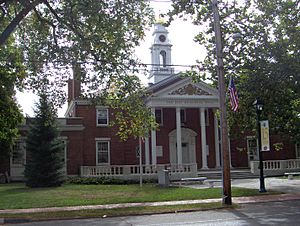 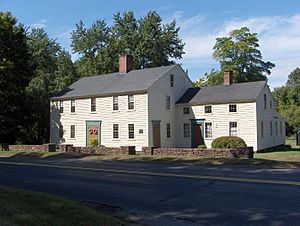 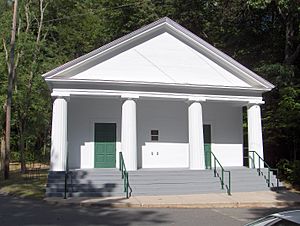 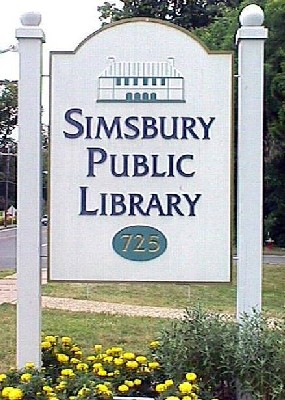 The Simsbury Public Library serves more than 800 residents daily and offers many programs and services including homebound delivery, public computers, a museum pass program, a Business Resource Center, and 24/7 reference assistance. The library can trace its history back to 1872 as the Town’s Social and Literary Club. In 1890 the town built a library as part of the Town’s center and it operated until the present library was constructed nearby in 1985. The library held a grand opening to celebrate the renovated library in June 2008. In the year ending June 30, 2006, the library maintained a collection of 163,000 print, audio, and video items, offered the contents of 40 databases, circulated 436,000 items, answered 57,000 requests for information, and offered 756 programs to the various constituencies that the Library serves.

According to Simsbury's 2015 Comprehensive Annual Financial Report, the top employers in the city are: 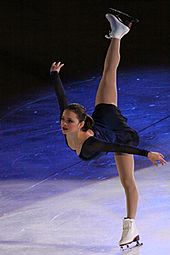 All content from Kiddle encyclopedia articles (including the article images and facts) can be freely used under Attribution-ShareAlike license, unless stated otherwise. Cite this article:
Simsbury, Connecticut Facts for Kids. Kiddle Encyclopedia.